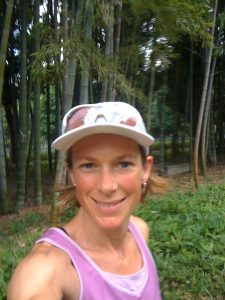 Tales from the Tokyo trails. 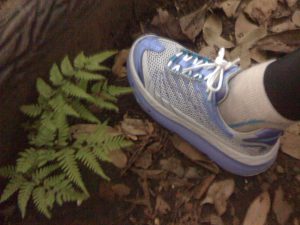 Tales from the Tokyo trails.  I awoke this morning to temps in the low 20’s and humidity around 75%, so needless to say though at sea level, I did feel the heaviness in the air. It was not quite like I remember in Shanghai in the summer when you got out of the shower, towelled off and a few seconds later were dripping again. Here the temperatures were pleasant, a nice change from the cold temp we have been having in the Alps.

I did manage to find a few dirt paths today on my quest today for a little nature amongst this grand ville! I set out thinking I was going to go for a run around the Emperors Imperial Palace-. 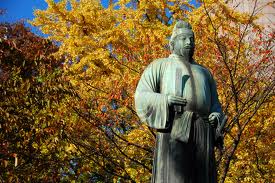 With map, and without a Japanese phrase book, I set off towards where I thought the gardens were. I followed my instinct which usually is pretty good in the mountains, but not guaranteed here in the city. I climbed a little hill of pavement and soon saw many people and school children walking towards an Imperial Gate. 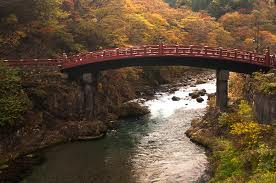 I jogged along, probably standing out like a sore thumb with my blond hair,  black Skins shorts, my pink Wild Roses shirt,  and my purple Hoka’s. 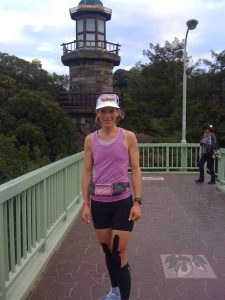 Can you tell me where the trails are???

No sooner than later, I was stopped by a guard holding up his hand very officially. “No Jogging!” he said in broken English. Humpf? No jogging? “Walking only,” He said motioning again to the area. Ok, I thought. I did not see any signs but perhaps it is disruptive to the setting. Perplexed and puzzled, I turned around and soon caught up with some school boys and girls jogging in their school uniforms in another direction. I tucked in behind as discrete as I could be in this setting and followed. Soon we were heading into the Kitanomaru Park (part of the Imperial Gardens). There I managed to find some real nature amongst this big city! I love flowers and have always been interested in the art of Ikebana. 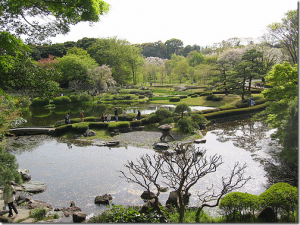 The gardens are another version of this on a larger scale.  Here the plants, trees and flowers were laid out with names of all the species on small signs. Bamboo trees! Pink flowers! 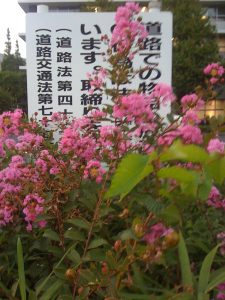 Purple Flowers that went very well with the Hoka’s. 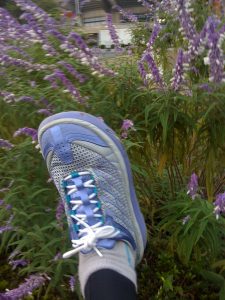 In this garden, I manged to find steps on trails, not like the steps on the Petit Balcon Sud at home and some dirt amoung the Ginko trees. 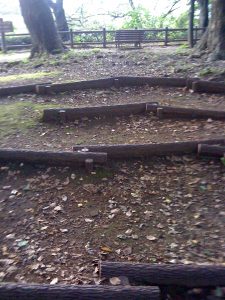 In parts of the garden there were birds singing from high in the trees (it sounded a bit like monkeys- but I don’t think there are monkeys here). 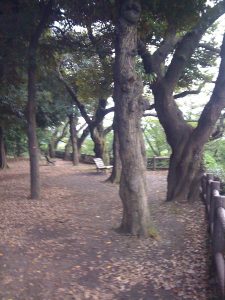 I did hear some school girls putting on  beautiful musical concert near the lake. One thing that I was not too excited about was this giant spider across my path,

nor the numerous mosquito bites I left with. I remembered my days in China and when the mosquito repellent was your best friend. I spent the rest of the afternoon on a quest for mosquito repellent. I tried to say it slowly and in many different ways, bug spray, insect repellent, mosquito, moustique…but I just did not have any luck what so ever. I did not have my Google translate with me so went back empty handed with a handful of mosquito bites. 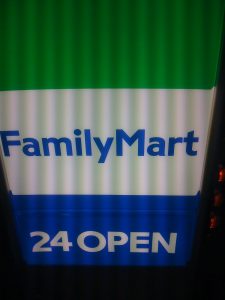 The evening adventure was a little shopping and a little dinner. Once again, I frequented the local convenience store, though this time it was not 7/11, but the Family Mart (open 24hrs) Well, that is a rarity for me to see, as in France there is no such thing as a store open for 24hrs. It’s 9-12 and then a big break and then 3-6:30. Basta. And Sundays, nothing, rien, nada. So the Tokyo, Family Mart and non stop opening hours was definitely a treat for me and my jet lag. I spent several minutes wandering the aisles (kind of like I do when I go back the the USA and go to Whole Foods or Walmart- (even though the two are drastically different I seem to get lost in them kind of like I get lost in Tokyo!) Here at the local Family Mart the aisles were not nearly as big or as many, but the variety was hard to beat. I learned that Starbucks now has Macha Green Tea Latte and Hazelnut Ice coffee to go. 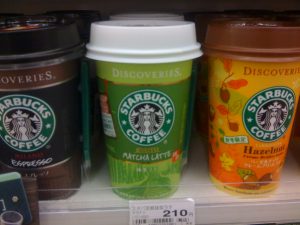 I know all of you in the US are thinking, where has she been? Well, I live in France and they don’t sell this at the local Super U. Only the Emmi Swiss iced coffee’s which I steer clear of  most of the time. Interestingly enough, I counted 2 Family Mart’s and 2 Seven/Eleven’s in the radius of 2 blocks. They are kind of like Starbucks in NYC. Speaking of cafe’s, also within the same radius, I saw, Starbucks, the Cafe de Crie, Bagel Cafe and at least 2 others which I can’t remember off hand. In the US when you go into your local 7/11 you might grab your bag of doritos and your big Slurpy. Well, here in Tokyo, here’s what you have as a selection. 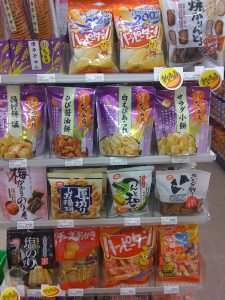 Which will it be?

For you ice cream fans, I did not see Ben & Jerry’s but Dean & Deluca seems to be making an impression here. Like I said before, there is antibac gel galore, at the hotel desk counter, at the check out counter and beyond.  It is about the cleanest city you will find out there! It even beats the Swiss. You should see the toilets! Impressive! You will also find air masks sold in bulk. I am somewhat tempted to purchase one to keep the city impurities out of my lungs as I am used to breathing the fresh air of the Alps. Happily I would choose the pink one! 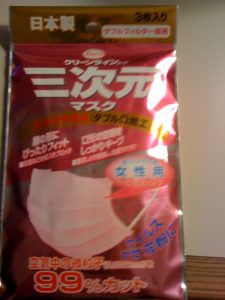 Next task for the evening was choosing somewhere to eat. The street was dotted with many options from Korean to Chinese, even a French Wine bistro 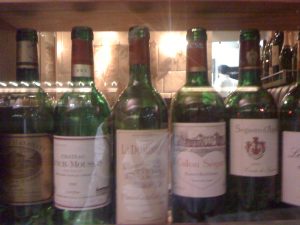 with some mighty nice wines in the window. J’imagine, tres cher! I did not stop in for a wine tasting…this time. I could have gone with an ol’ American standby like “Subway”. 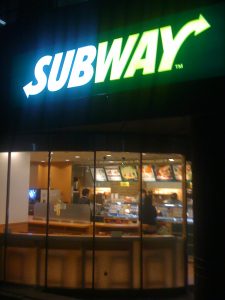 I know my kids were very excited to bring home their Subway Lunch bags this summer which we now use for snack bags. However, as the saying goes…. When in Rome, do as the Romans do.  I went with local flavor. Every sign was in Japanese so I had to resort to pictures. 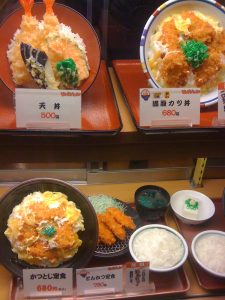 In I went and sat down at a table waited patiently for the waitress to come. Shortly I soon learned from her hand gestures that I was to place my order from the machine in the corner . Yes, from the vending machine.  It looked kind of like where you pay for your parking ticket in the Place de Mt Blanc parking in Chamonix. 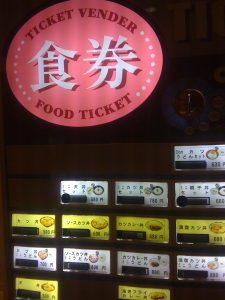 Ok, I thought and headed over there to look at some more pictures (only this time much smaller). I think I chose something like Tempura with Rice and Soba noodles, at least that is what the picture looked like. I put my money in the machine and hoped for the best! Out came a ticket, which I then gave to the waitress. Voila! And not long after I was enjoying a nice Japanese meal I had ordered from a vending machine. Pal mal et meme tres bon.

What else can you get from a vending machine here in Japan?  It seems almost everything but the kitchen sink. You will never go thirsty, that is for sure,  as you can buy just about any kind of drink you want at any time of day, if your local 24h Family Mart is not near by. Whether you are looking for a water, 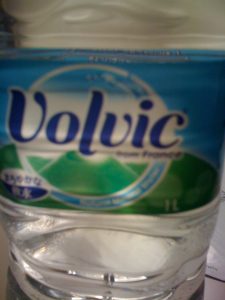 Yes! I can find my Alps water! Or at least that is what Nestle says!

pink vitamen water, a iced (starbucks) coffee, a Red Bull, or even a Kirin Beer.  It is good to know for the upcoming race! You never know when you might need something over 72km when there are no aid stations except water. I’ll just have to remember to put some Yen in my pocket just in case. Like many places in the world, cigarettes are sold in vending machines! Smoking is still aloud in restaurants in Japan ;-( Arg!)  They are a far distance from NYC , who is in the process of trying to pass a law banning smoking outside! Go NYC! 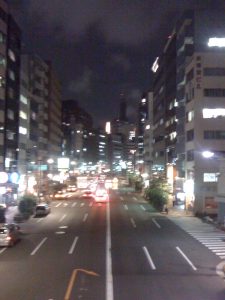 Stay tuned for more tails from the Tokyo trails and the race coming up!