A few stats about this year’s course: The Trail des Aiguilles Rouges is put on by the local Chamonix running club CMBM, of which I am a member. The course changes every year but always takes place in the Aiguilles Rouges area of the Mt Blanc Valley. This year’s course was intended to be 51km and 3900m but the route was changed due to snow up high. The reroute was actually longer.  53km, with 3933 meter elevation gain and 3740+ descent. Weather- 15 cm fresh snow up high- very little visability. Light to heavy rain at times in the morning, afternoon a few pockets of sunshine. Real mountain conditions. Nina placed 2nd place for women w/ time of 8h31m, 46th overall in a field of 585 runners. 92 of those dropped out. 718 signed up. 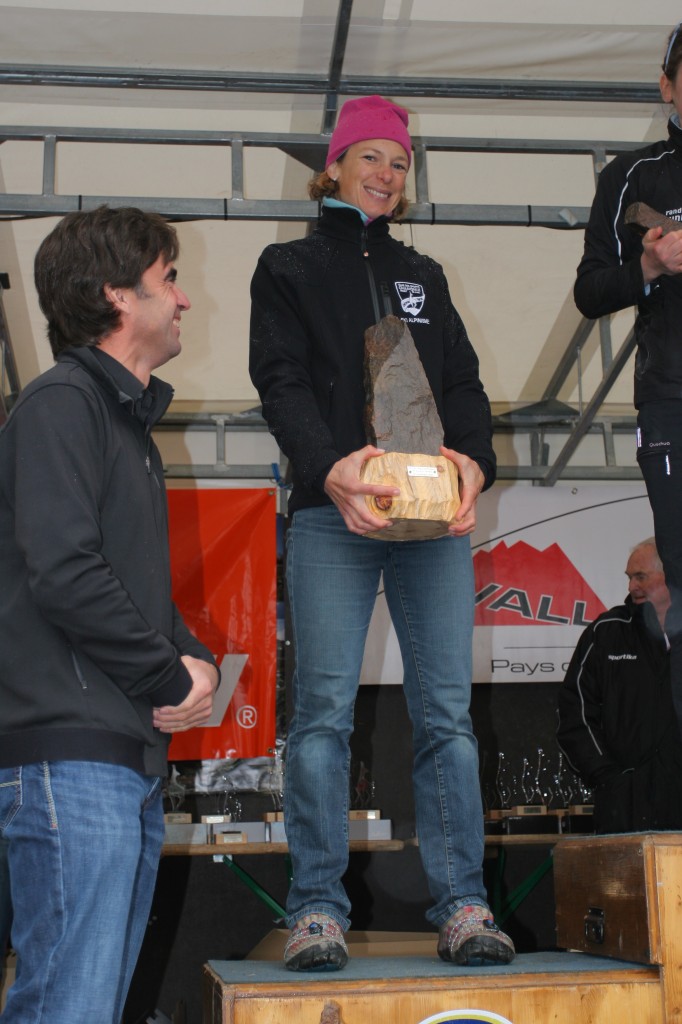 The kids were back to school and the Chamonix virus was back too! It hard hard with the sudden change of temperatures. We had been having glorious fall days with sunshine and now snow at 1500 meters. It was not too long that both my boys were sniffling and coughing. I stocked  up at the store on tissues and kids multi vitamins! I was determined to not get sick this time! Wash hands for 30 seconds. Do you know how to properly wash your hands? Well, you might if you are a doc, or nurse. I snapped this photo at my favorite Swiss rest area- Go figure! 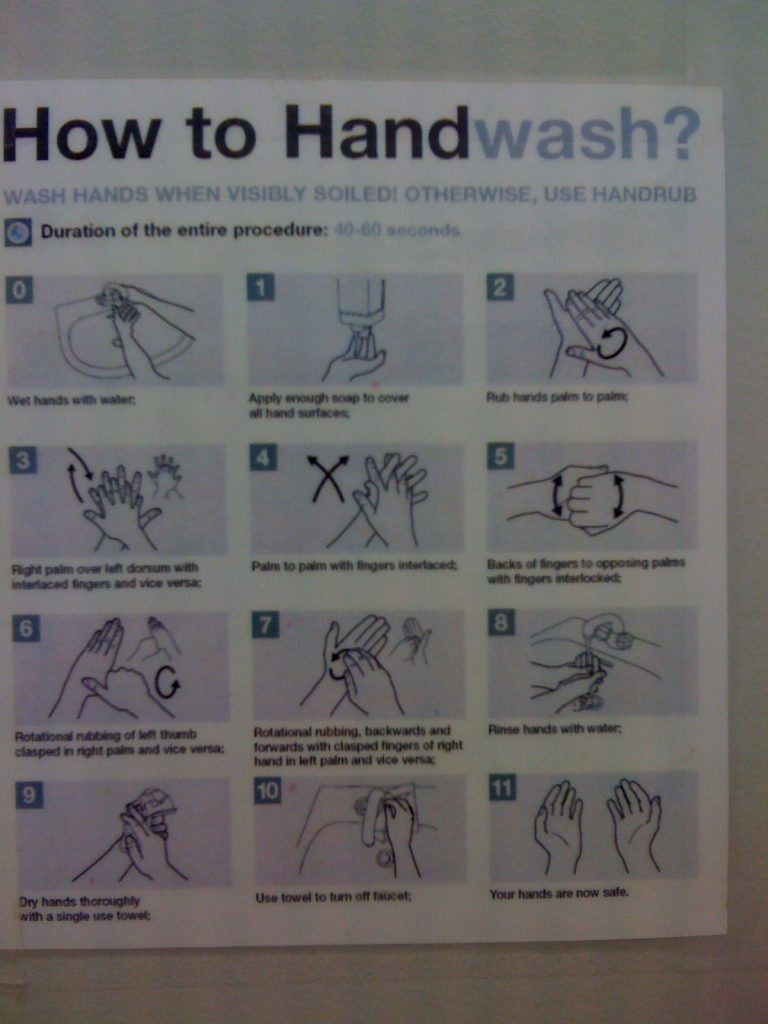 Do you really know how to wash your hands? Check here

My collage coach always said, or was that my husband? Don’t share water bottles! And yes,  probably like many moms, I have a little bottle of anti bacterial gel in every car, purse, backpack and pocket…Am I going overboard? No, The Trail des Aiguillles Rouge was coming up next weekend. This was my  objective for the summer season. I did  not sign up for  the CCC or TDS, though its easy to be lured in. Too close to do them both for me.  So, this was it, My hometown race, my running club CMBM’s race. I was fighting this virus off like a champ! No sniffles yet, yes! A little tapering the week before. However, like a sneaky black cat, the cold snuck up on me by the end of the week.  My training for the days prior to the course was boiling fresh ginger and adding lemon and  spoonfuls of honey.

Friday afternoon, while sipping ginger tea, I prepped my gear for the race for the conditions that were forecasted, snow and cold! I can never prep my gear with my kids around because they are liable to break into one of the gels or shot blocks or walk away with the required emergency blanket without me knowing. I would later show up for the equipment check and find that it was missing. And it takes me about as long to prep my gear as it takes a gal to pack for a trip. It seems to take ages.  Though I promise I do not bring as much as an overnight. My pal lynds can attest I do not travel light.   Light weight is key when you are racing, but when you are not, bring the comforts of home! 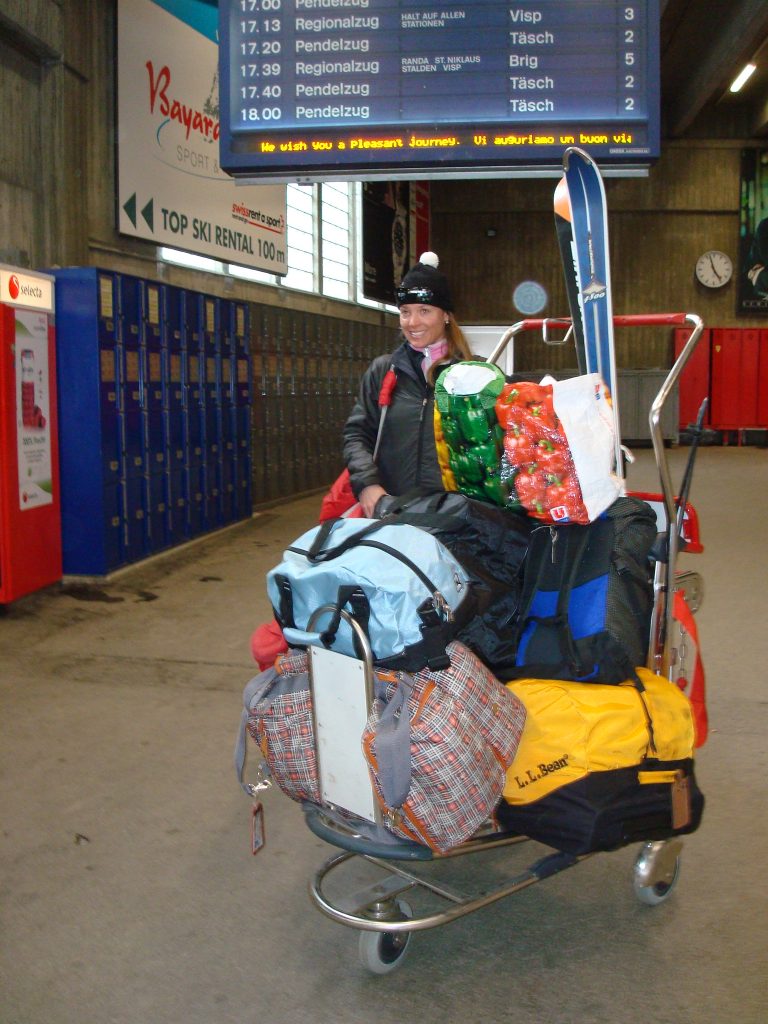 I was pretty much heading into along ski alpinisme race minus the skis and cat suit! I had the gloves, hand warmers, hat. All except the pink race suit! Mind you, there were a couple men wearing some retro ski mo suits on the course!  They were easy to follow in the dark! Race morning, again like packing a suitcase, but rather,  I was like any gal  in front of her closet heading out to a dance, and not quite sure what to wear! She might change 5 or 6x times before deciding on an outfit. I managed to change one more time with about 10 min left to the start. In the end, I was very happy with my choice of  Skins outfit:  short sleeves, with arm warmers, capri’s and booster socks and smartwool gloves and of course my lucky pink Wild Roses buff! I had the essentials for the cold weather in my backpack.  Though I was not heading to a dance,  I did try to keep my feet dancing on the snow and the rocks;  it definately  helped having some Lady Gaga Disco Heaven, Madonna, even a little  Dynamite thrown in there setting the beat on my ipod! 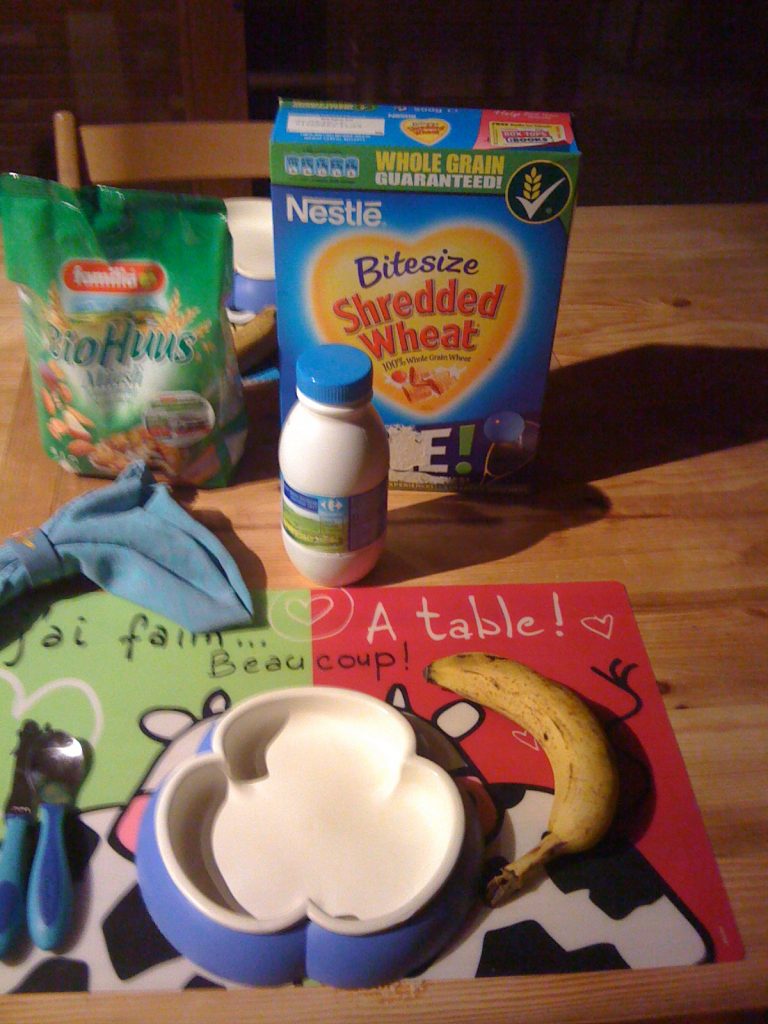 My attempt to lay out breakfast the night before. Try it, it does work!

Saturday rolled around and I rolled out of bed feeling less than 100%.I had a little sleep in as I had prepped my boys to make their own breakfast the night before and set it all out for them. They managed with a bit of a mess to clean up but Mommy got to sleep in past 7 which was a treat.   I seemed to have lost my voice in the night. Hmm…what will unfold? How will I feel tomorrow?  I did lots of positive thinking and visualation of the course , drank lots more ginger tea, and took advantage of plugging the boys in front of a dvd , an educational dvd none the less, so I could steal a little shut eye and maybe find my voice again.  Later that day we all headed to town, got my bib for the next day and was ready to rock and roll! Well, at least put on some dancing tunes so we could get through the evening in style and get to bed early for that early wake up call!

I planned the evening in my head: Early dinner, pasta for all, and early bed for all. I got the kids in bed early but my nightowl 4 year old did not go down so easily. Finally after a few calls of, ” I am hungry…and I am thirsty…and I want a light on”….all was quiet on the home front. As I drifted off to sleep, I reminded myself that I really need to read the “1-2-3 Magic!” book on positive discipline and maybe bedtimes will go easier.  I managed a few  hours of shuteye til my 3am wake up call.

3am: rise and shine! ….Still no voice so I was not singing in the shower this morning and it was really too early to know how the rest of me was feeling, but up and at em’ I was! How cool is it to leave your house and jog easily to the start of your race for a warm up?  Temp was 5 degrees chez moi. Visibility ‘nil! I could barely see 2 feet in front.  Rumor had it there was 15-20 cm of fresh snow up at Lac Blanc! Hmm…This Could be interesting…..maybe I should have brought my skis? 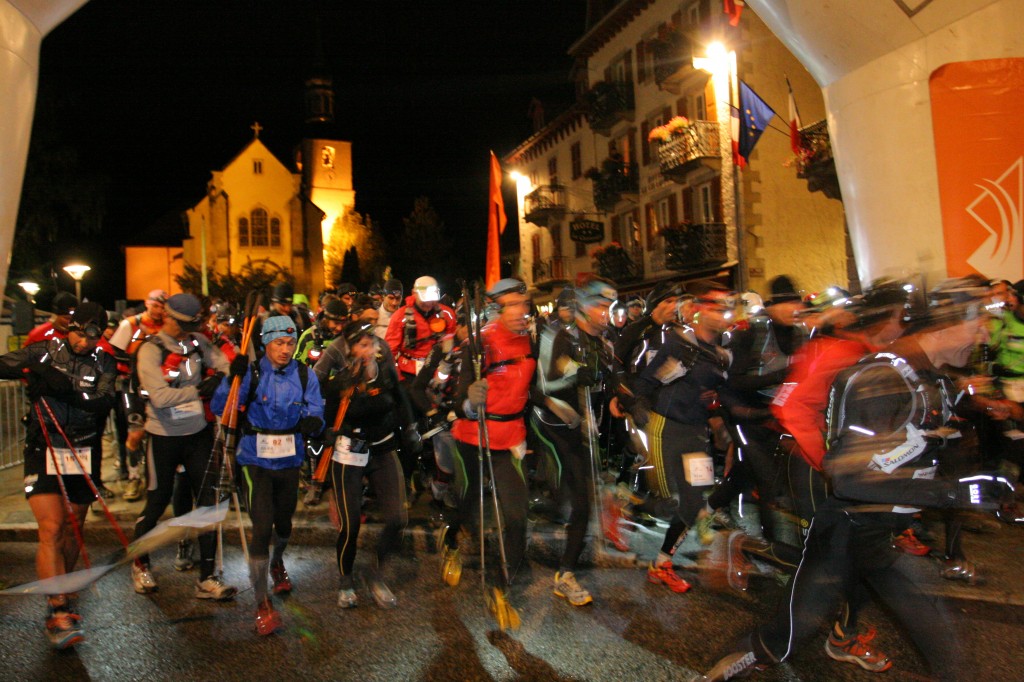 The Start of the Trail des Aiguilles Rouge

After my last minute outfit change, ….we set off with a bang….the first 45 min a bloc as they say here in France.  Pretty much it means go for it!  Was my heart rate high because I was fighting something or just the normal high heart rate for a start? 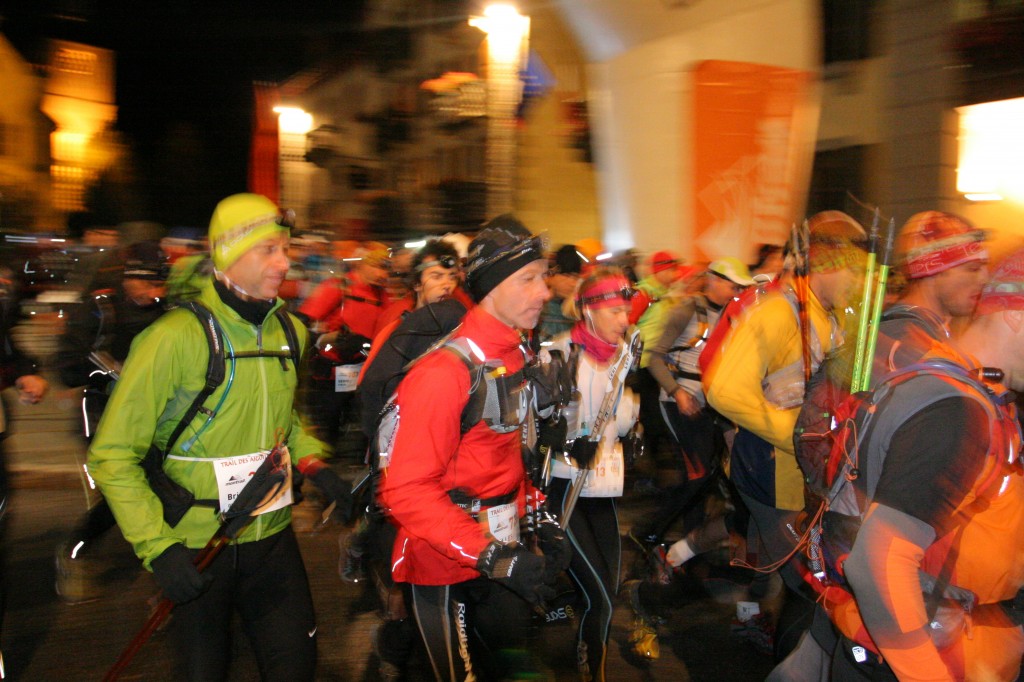 Not much Viz….. I was regretting not taking my Petzl Ultra lamp in this fog . But this new model did the trick really well too! 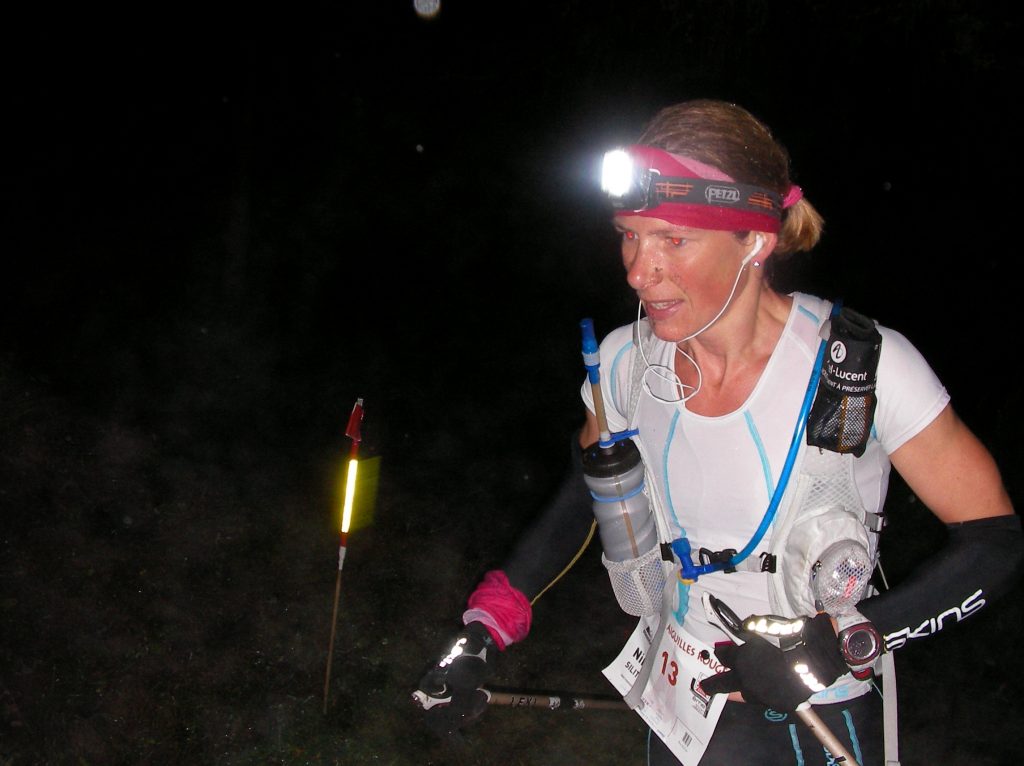 It was slick, and technical; slippery roots and rocks could easily catch you off guard and send you down. You really could not let your mind drift for one milli second, especially on the downhills. One time I did and felt my left leg slipping down a steep slope- kindly a woman near by stopped and grabbed my arm seeing if I was ok. We forged upward and not soon after we arrived at the level of the blueberry bushes and rhododendrons we were above the clouds. It was breathtaking! The full moon was in the mist. 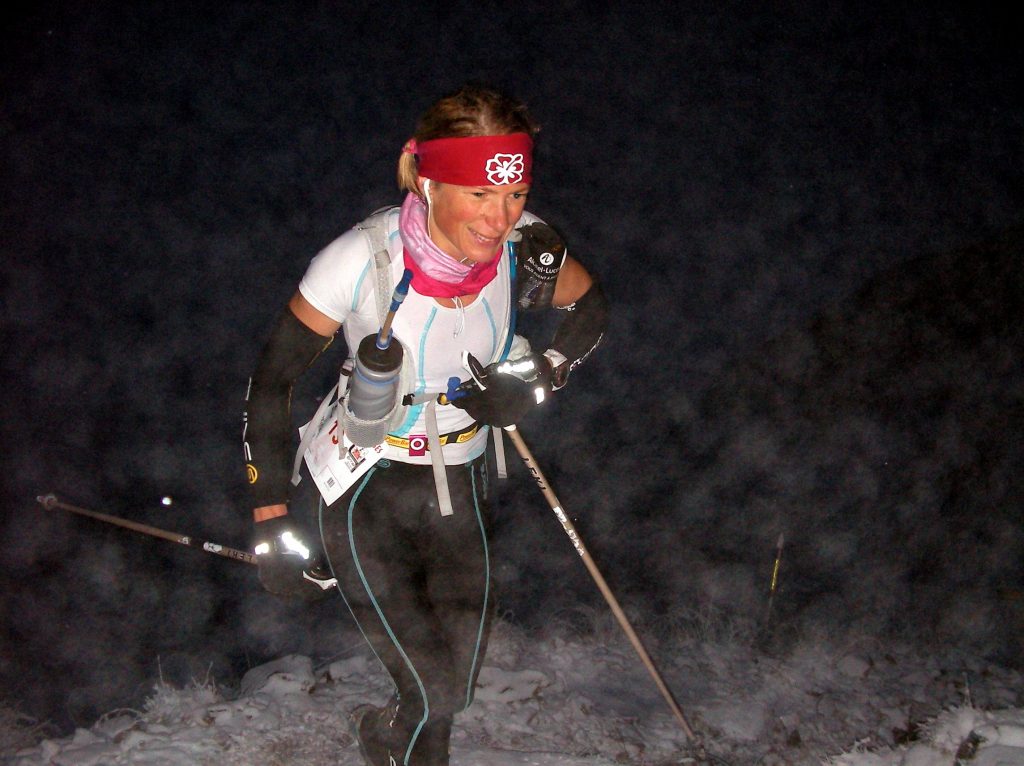 Climbing up towards daybreak at Pierre Blanche

They was a dusting of frost and as we went higher the surrounding peaks were blanketed with a fresh coat of white snow. This was I think one of my favorite parts of the race! I got into my groove climbing upwards towards Pierre Blanche and then onto Aiguillete des Houches.  By this point we were in snow! I was a little like a kid at Christmas with all the fresh snow! All of us remember the first snow of the season?  Here it was! 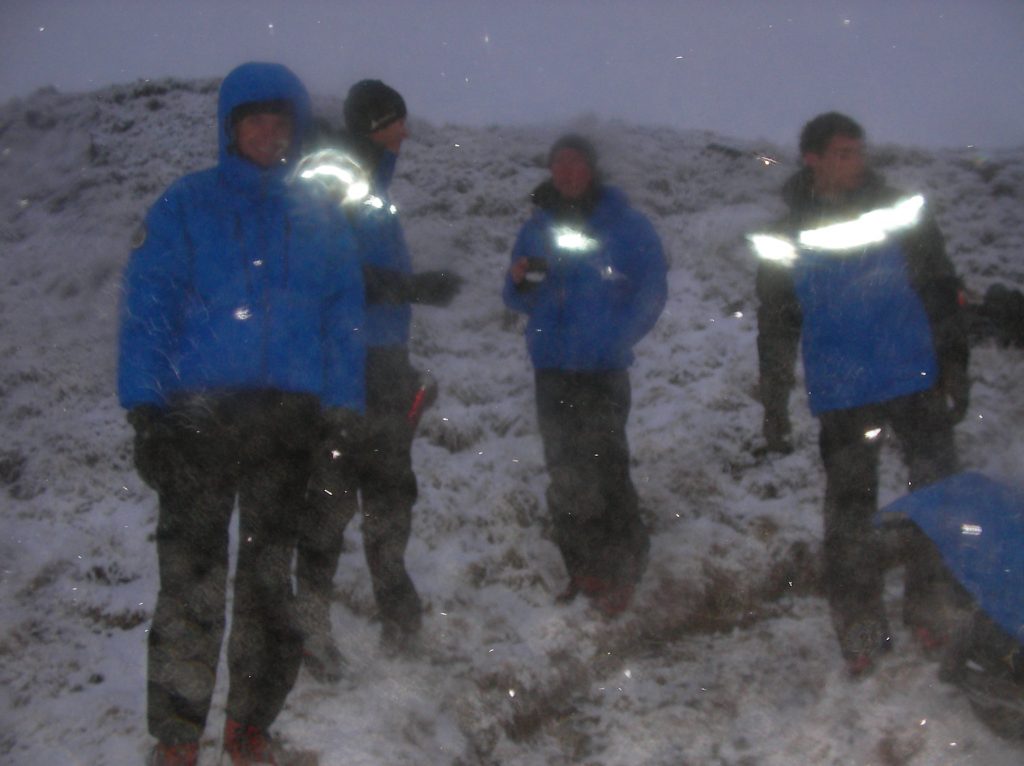 The course was well protected with mountain rescue police where you needed them. Thanks to the great CMBM running club of Chamonix, they (all the volunteers) did an excellent job of organizing a great race, in tough weather conditions. Merci a tous!

We descended from the Aiguiette des Houches to Belachat down the sentiers des guardes , very technical but super fun! It was daylight now so much easier to run. I found the snow actually was super sticky rather than slippery. Another climb up to Planpraz- the first real aid station! The hot soup sure tasted good here but I did not stay long or would have chilled down so off to the Flegere. There it was awesome to see friends welcoming and cheering! 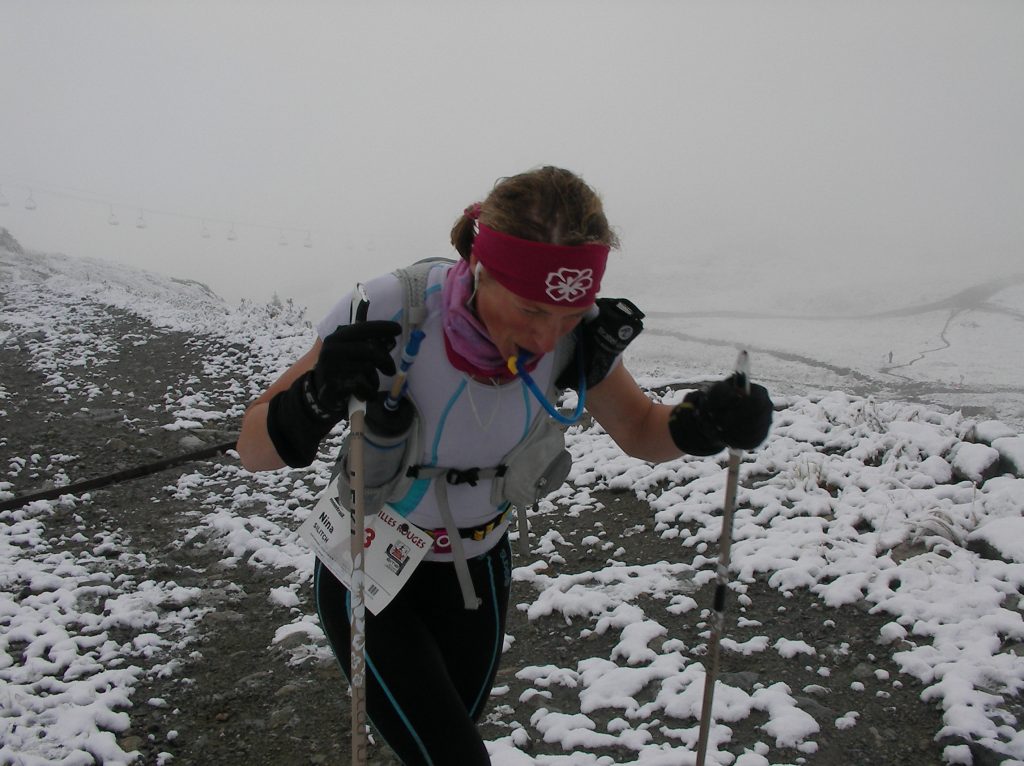 Is that magic potion in the Camelbak!

The climb up towards Lac Blanc via the Tete aux Vents was foggy, so tough to see but at least it was not dark. There was more snow, rocks and steep steps to climb and then a great long, technical descent to Argentiere! There, my boys were waiting, welcoming me as I passed through. There was a nice clearing in the sky too. Both of these,  a nice site to see after 6 hrs of racing. 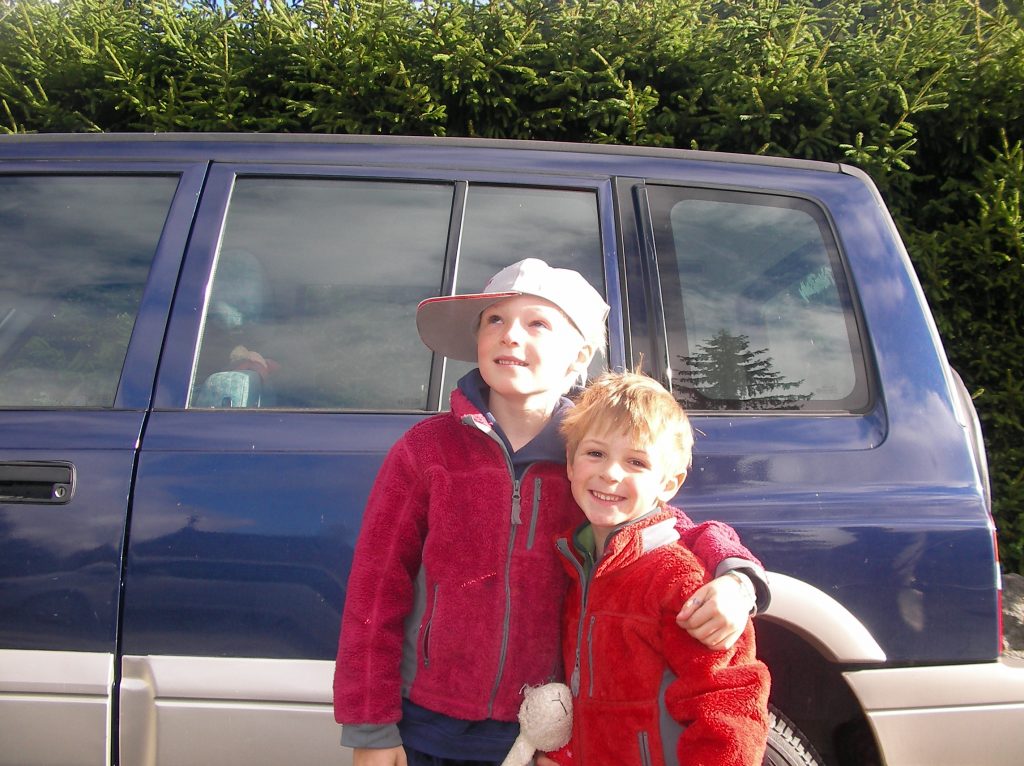 One more big climb to go, Aiguettes des Possettes.! Oof, This was a tough one, as my legs felt shot. I pressed on, tried to stay in a good rhythm, listening to my music and thinking good thoughts! Coming towards the col on the last downhill here I think I was trying to still smile or not… 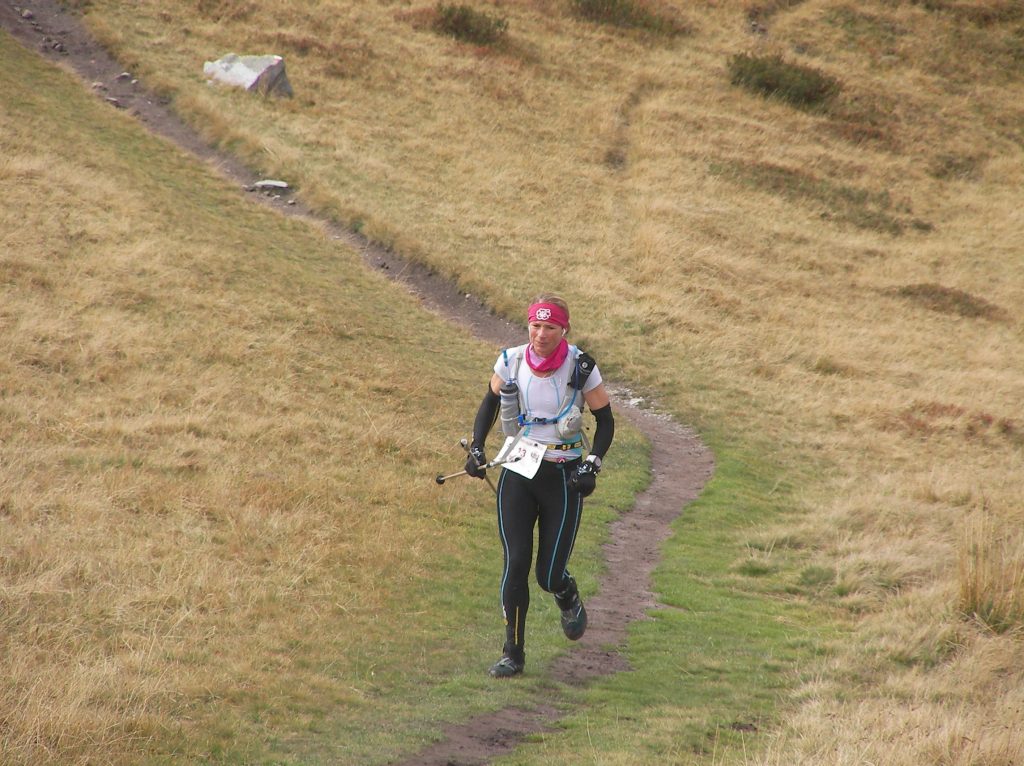 Ouf! Is this almost over??

But the finish was not too far away!  Maybe 30 minutes! Almost there! 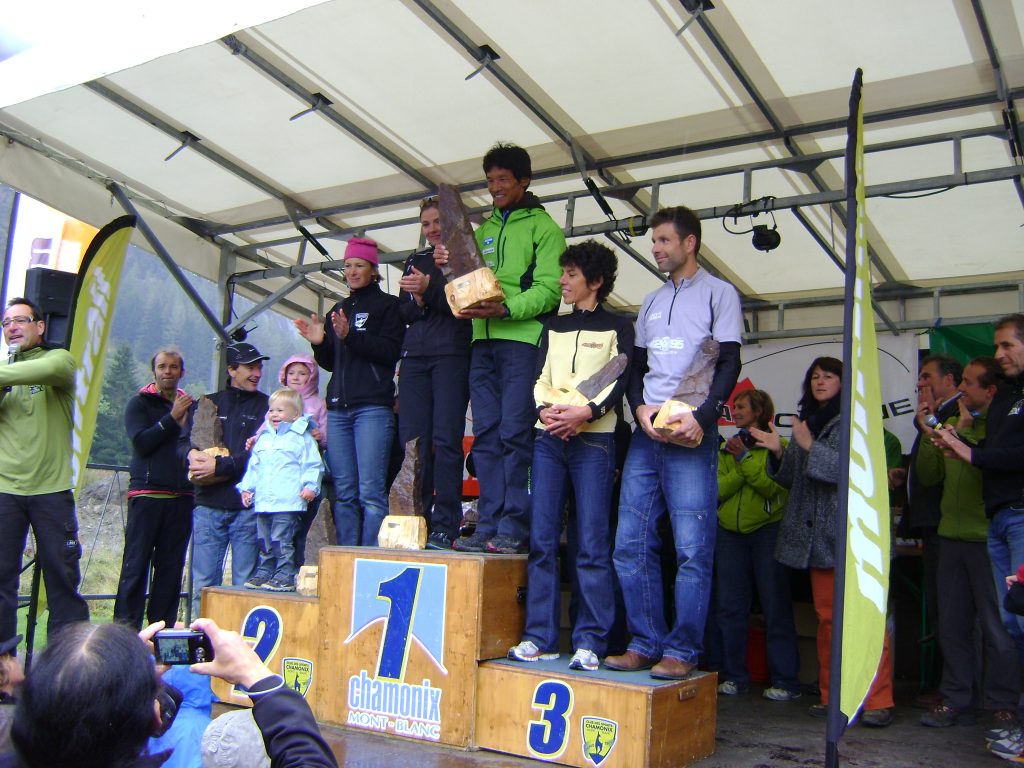 It was a dream for sure, running into the finish in Vallorcine, in 2nd place.  What a great way to race, with local friends all along the course encouraging you along the way!  The best part was giving my boys a hug at the end! 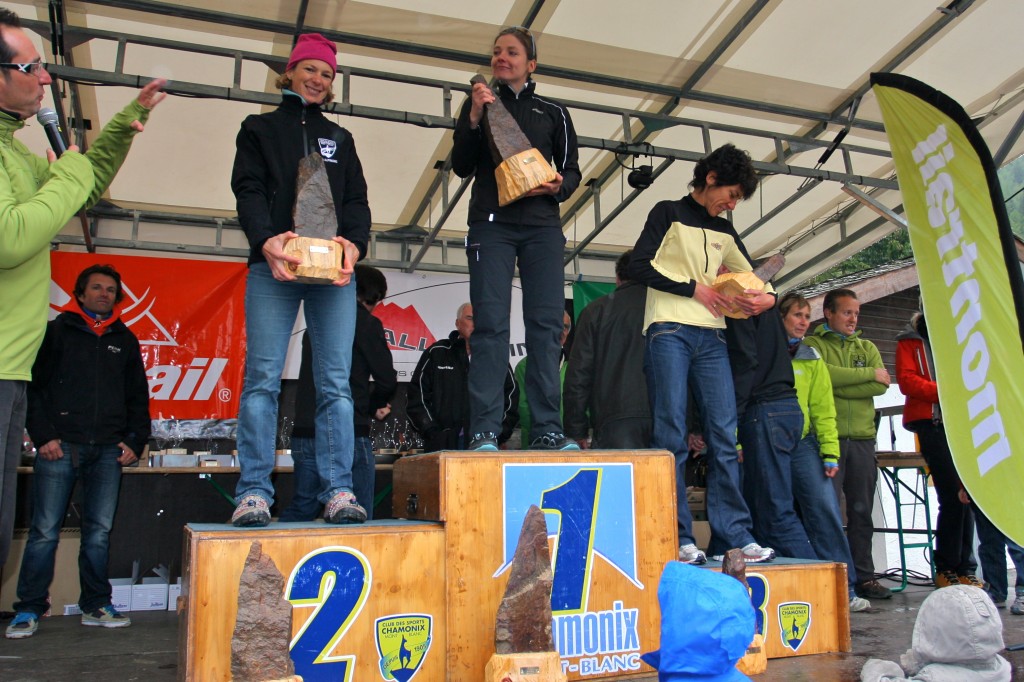