Podium for Nina in the French National Championships, 12 dec. 2010

It was beautiful day in the Southern Alps! Sunshine, not too cold, a techinical course! I like those late starts too! Great fun to be here with my friends from Chamonix Ski Alpinisme club and also a great way to start the season! Thanks to Michael, who found the time to do a race report below. 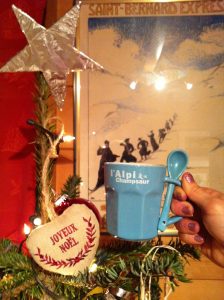 One of the best race souvenirs from this race! A mug to enjoy hot cocoa!

Bonne Fetes a tous! Happy Holidays to all! Enjoy this festive holiday season with those you love, hopefully somewhere on snow!

Third Place and a Bronze Medal in the French National Ski Alpinisme Championships, Individual race  last weekend! Nina had an exceptional race on a course that really suited her strengths. Long with many transitions and lots of long downhill runs on rock-hard “New England” snow. The hard snow also allowed her cross country ski race experience to shine through giving her good grip to stride and glide well on the icy surface. With all Nina’s hard work this summer and fall, her climbing is really coming along too.

In fact, as she sprinted away from the starting line, on a gradual, but not too steep uphill, she found herself way out in front ahead of not only all of the senior women, but all the junior men who started at the same time. As a young Bjorn Daehlie once said, after being criticised by his coaches and competitors for starting out too fast, then blowing up, “it’s not about starting slower, it’s about finishing faster”, and although Nina was caught by some of the others, she held off a fair amount of the pack.

Nina, on the right with pink chamois on her arms, doing one of her signature lightning quick transitions from skinning up to skiing down. It was a beautiful day above the Orcieres ski area just south of the Ecrins National Park in France.

She was honored to be on the podium with two of the best racers in France, one a world champion. In first place was Laetitia Roux, one of the best racers to date in skimo and summer uphill trail running.  And second place was Valentine Fabre, one of Nina’s teammates in the Chamonix Ski Alpinisme Club.

Kudos to Nina and all her teammates who raced!

Rocketing down the slope and reeling in her competitors. Here Nina is beside Corinne Favre.

Kilian Jornet is a Salomon sponsored trail runner and a World Champion in Ski Mountaineering Racing. He won this race.

Some French men transitioning at the summit. It was a beautiful day, cool, clear, but not too cold.

The downhill after the summit transition. The snow was hard and the speed were high.

You can just see the "ant line" of racers skinning up the switchbacks well below in the valley. The terrain was very open and expansive with great views.