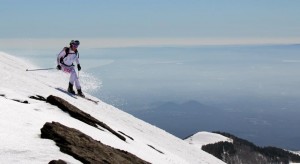 From Snow to Sea: Nina on the descent of the World Cup Ind. Course on Mt. Enta (photo http://martinavalmassoi.com/) 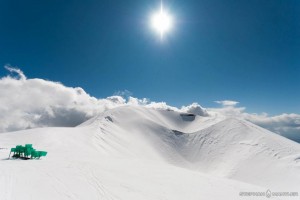 There is also Mt. Etna, the most active volcano in Europe.  Did you know that the first ice cream came from Sicily? Greeks and Romans sent runners  to the top of the Etna slopes to get some snow, which was then sweetened with Sicilian honey,  nuts and berries. 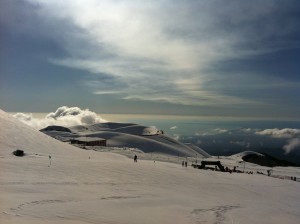 What you probably don’t think of is skiing, a ski-mountaineering World Cup none-the-less. Well, there is in fact skiing on Mt. Etna!  The locals are also passionate about ski mountaineering on this active, unpredictable volcanic peak. The 2nd World Cup, in a 5 world cup series was held on snowy slopes of Mt. Etna, in the dichotomy of the sea against the snow.  Perhaps we were not so different from the runners of roman times, only we racers were running around in lycra race suits and skis on our feet! 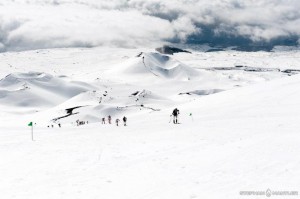 The night before we arrived, Sicily received over 2meters  of fresh snow. That is over 6 feet for those of you who think in inches! 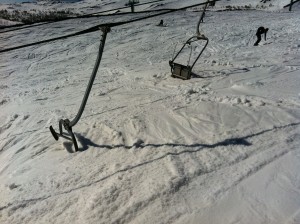 There was so much snow, not only the access road was blocked, but also the chairlifts. 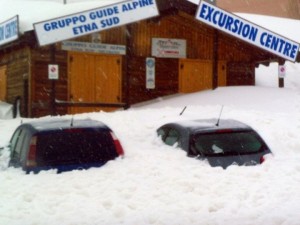 Thanks to a hard, working Sicilian road crew, just like Katy and the Big Snow, (a book my boys love), we were able to get to the race.   The most baffling thing was that even though it snowed 2 meters, there was no powder! 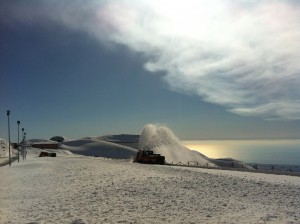 The snow quickly transformed and condensed to hard pack. Skiing down was like skiing in sand, with a layer snow crystals washing over the hard surface, making a very cool swishing noise. I was stoked I could use my new swix poles with super lightweight baskets! Thanks Swix and Michael for prepping them in time! 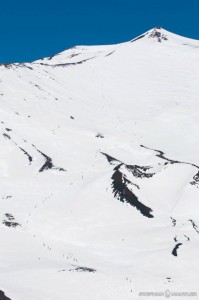 There was a real rendezvous of nations here for this race, with the top athletes in ski mountaineering circuit from France, Spain, Italy, Switzerland, Germany and Austria. We were welcomed in an opening ceremony of parade of nations. Friday the vertical race was straight up the slopes of the volcan with a boot pack in the middle. This was a nice change from the  the normal straight up against gravity verticals. 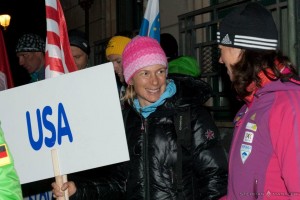 Talk about extremes. Two weeks ago when I set foot on the starting line it was -20 C, and I was sporting amour for the cold (hand warmers and mittens) and this time a complete opposite of 14 degrees Celsius. The vertical was for me all about the ‘gitter done attitude adopted from the John Deere roots in my own family. 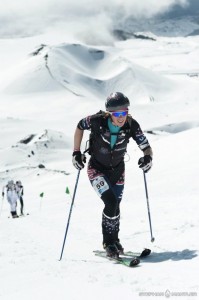 The vertical was a pure fight against gravity, one of the steeper verticals I have done. I managed to find some  power at the boot pack and kept thinking of Anders message to me to have a happy race and finish with a smile. 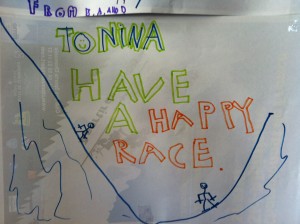 from my budding little optimist

Sicilians are on Sicilian time, not Swiss time, much to the dismay of the heavily present Swiss team. It is a refreshing change  to the hubbub of today’s modern pace and one we all can all meditate on in a full breath. Briefings starting 30 minutes late, starts delayed due to traffic mayhem on the access road, no problemo. Tranquillo….just breathe… 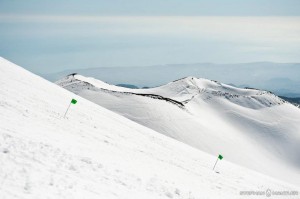 A race with a view (photo:www.stephanmantler.com)

Saturday the heat was on and I was ready. Plenty of Hammer Nutrition Heed in my camelbak, check  Sporting my white national team suit to avoid melting in the hot sun! check . Once again, yours truly, finds her pace at the middle of the first climb. This course was not so long (1450m) with2 long climbs, and not so technical up or down so it favored those who are good climbers and difficult to gain much on the descents. I did managed to find my power on the 2nd climb and had some clean and fast transitions, passing 3 WC women, 3 FISI women, finishing 9th overall WC,  in the 82% from the winner, a drastic improvement from last year.

Nina on the 2nd downhill on the individual course (photo http://martinavalmassoi.com/)

Adventuring to the top of the Mt Etna Crater with my austrian teammate Veronika after the race was a highlight of the trip, reaching the snow summit and looking out towards the sea  in the distance breathing in the two 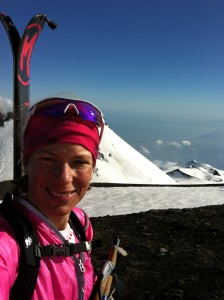 Looking out towards the sea

Here are some photos from the journey to the summit.

The ski down was spectacular! We descended over 2000 meters on soft spring snow, weaving our way through lava rocks along the way and hitched out way back to town. 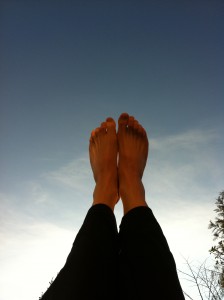 Yoga in the Sicilian Sunshine 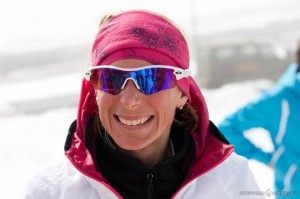 So that is it from Sicily. 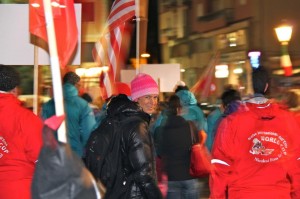 I leave you with a message from Danielle LaPorte’s excerpt on Decide to Rise who, b.t.w. is full of inspiration, and sageful words of wisdom.

Re-prioritize your aches and pains.

Infuse your sensitivities with courage.

There are soul-justified reasons to cancel. There are times to just stop. This isn’t one of them. Keep going. Show up. Full on. Full tilt. Full out. Decide to be one of those people who pull it off.

Do what you say you’re going to do.  Don’t let us down.  Decide to rise.

Why decide to rise? Not for the reasons you might think. In fact, these are the reasons that will make you sick and tired:

Decide to rise because you want to expand — your being, your life, your possibilities.

Decide to rise because super powers are meant to be activated and applied in everyday life.

Decide to rise to explore your place in the universe.

On the other side of deciding to rise is illumination, ecstasy, insight. And the angel of your strength is there waiting, smiling, applauding, with a goblet of endorphins for you. Drink up.

When you transcend circumstances you get special privileges. You get evidence that you are indeed amazing, and irrefutable proof that what your heart and mind choose is what matters. And you get the deep knowing that life wants you to win.

It’s your soul speaking and she says,