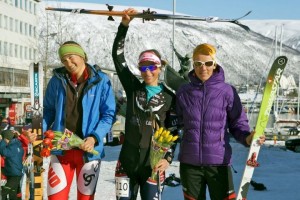 Winning the World Cup Ski Mountaineering Sprint on April 14th, 2012 in Tromso, Norway is a dream come true for me. It is a culmination of reaching for something that felt somewhat unattainable, committing and believing. When I stepped on the airplane to Tromso Norway and flew all the way up north, across the Arctic circle to the 69thdegree latitude, I had no idea that I was going to come home with a gold medal. 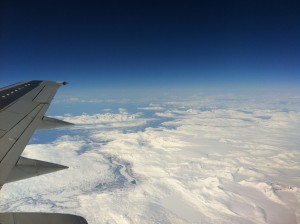 I set off simply to have a “happy race” as Anders, my youngest son told me to have. 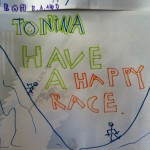 Norway is a country that holds a special place in my heart. My first visit to Norway was in 2003 when Michael and I made a journey to ski the famous Birkebeiner World Loppet cross county ski race traversing 55km of the mountain range  near Lillehammer. Needless to say that spring I not only skied the Birkebeiner, but also ran the Paris marathon with my best friend,  followed shortly after by my first haute route with Michael and friends on my first randonee/ski mountaineering set up. 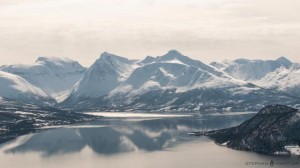 A beautiful country and culture

Growing up skiing in New England both alpine and cross country I did love snow sports thanks to my parents and some inspiration from some great coaches at CVA,  Holderness and Dartmouth. Back then sports were important to me, but I never really gave them the commitment and dedication it takes to excel further to a higher level as I have done the past two years. It really was the trip to Norway in 2003 that planted a seed to come back one day. 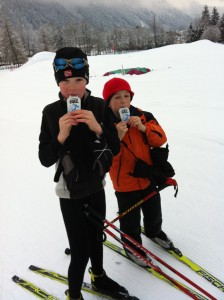 Birki and Anders taking a pause with Hammer Gels

Our boys, Birken and Anders, were given Scandinavian names,  hence one of the reasons the local Tromso paper wanted to interview me the day before the Sprint race. It was somewhat serendipitous that during the interview the journalist asked me what  my expectations were  for the weekend. I replied that I had my sights set on the Sprint race. 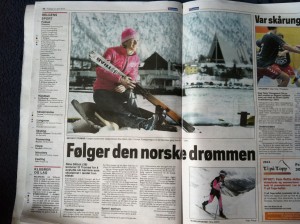 Newspaper article in Tromso paper the day before sprint race. Translation not available

And lo and behold, the next day I took the victory. 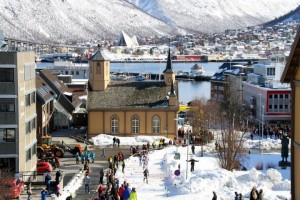 A view of the start of the final women’s sprint race with the town square view, Nina out in the lead

The notion of the ski mountaineering sprint has grown from the World Cup Sprints that take place in cross-country skiing in large cities like Milan (IT) or Bern (CH), Drammen (NO). The local city of Tromso, with 70,000 residents, trucked loads of snow in to prepare for the World Cup event on Saturday where crowds of spectators were able to watch the exciting event as they did their market shopping.

This was the first time a skimo sprint has taken place in a town center. More importantly, it was also the first time in history a North American has won a World Cup event in ski mountaineering. Typically alpine countries such as France, Italy, Spain, and Switzerland dominate the sport. This is a big step forward for the future of the sport. 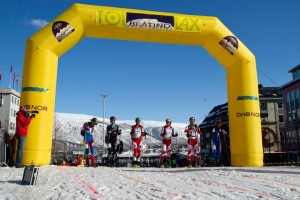 The start of the women’s sprint final

The Sprint formula is similar to world cup cross country sprints with obstacles and challenges of ski mountaineering.  It is comprised of an individual qualification round to win the access to the quarter finals followed by the semi finals and finals. One must adapt to the terrain so not all courses are alike. 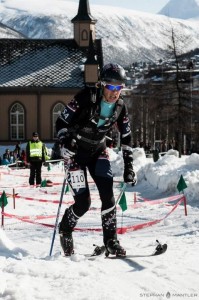 bootpack with skis on the pack. (no pic) 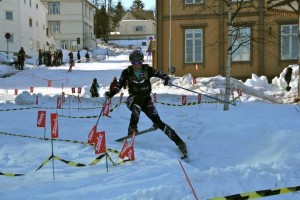 Obstacles on the downhill 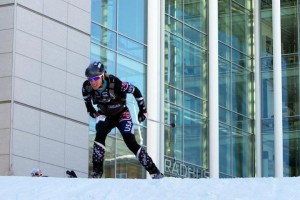 Skating past the downtown library

Finish skating to the line. 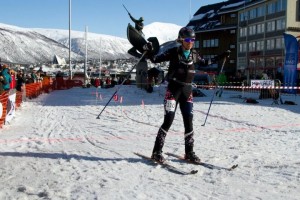 Finish at women’s final! Where are the other girls?

Athletes must be not only quick on the skis but also quick in the transition to excel at this event which lasts 2 ½ – 3 ½ minutes.

!!!! Click here on this You Tube video to see some footage of the women’s sprint final in Tromso.  Here you can see really what the sprint course is all about. Here is another video by Swiss Coach Gregory Gachet on YouTube.  Look at 5’56” for the semi final and then

Here are some more articles and photos of the sprint:

It feels like ages ago when Chamonix Club des Sports and the chamonix ski alpinisme club hosted the French National Championships in January. Being the President, it was unsure if I would be able to compete in this event, but I was really determined to make it happen.  It was an upbeat atmosphere with my friends and family cheering from the sidelines. I was crowned vice-champion of the sprint behind World Champion Laetitia Roux. I took home a gold medal for winning the veterans category.  The first world cup sprint was cancelled in Italy due to lack of snow leaving only one sprint event in this years ski mountaineering world cup in the final world cup 3 months later. My most recent races lately have been between 2 and 4 hours rather than 2-4 minutes! Ouf, Quite an extreme difference.! 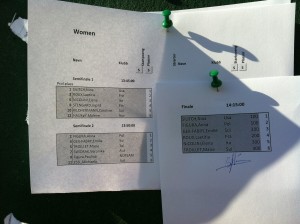 In Norway, Nina had fasted qualifying time, won the semi finals and the finals- she even beat 16 out of 28 world cup men overall

Being American, I was not authorized to participate in the European championships in Pelvoux France this year, even though the sprint would have been the event I would have loved to compete in. Maybe I will join in next year at the world championships when they are at Pelvoux, France. 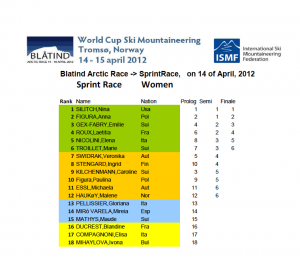 Results from the Sprint World Cup

Since living in Europe we have optimal coverage of world cup ski racing both alpine and Nordic. Michael, being, a huge fan of world cup nordic skiing was often watching the sprint races calling me to come watch. It was not through osmosis that Marit Bjorgen, Norwegian world champion cross country superstar, and Kikkan Randall, American, the current world cup sprint champion soon became inspirations to me in the sport.

The view of the fjords

I feel like I  share a special kind of bond with Kikkan Randall. I don’t know her personally but she has a mission to help encourage young girls and women in sport through her program Fast and Female. She has been dedicated to her sport through thick and thin in the Sprint discipline and beyond.  I remember her saying once about what she did for her win and she simply replied that she stayed relaxed, focused and smiled. For me staying relaxed, focused and smiling is ultra important in the sprint, non the less, to any success.

Kikkan is the first American to win a world cup sprint in cross-country skiing, none the less the World Cup crystal globe this year . (she also likes pink). She has made history for the sport of cross country skiing in the USA. 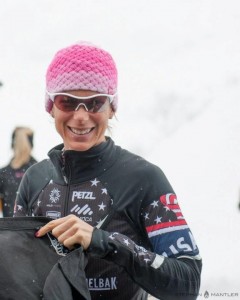 Like Kikan, I, too, feel proud to have made history, being the first North American to win a world cup event in ski mountaineering.

Tromso was a port of tranquility for me. There was a calming and centered feeling when looking out in the water with the ships passing. The sun rose early and I woke to calls of seagulls close by. 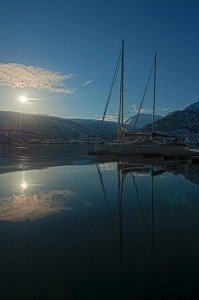 I used to rock climb a lot BC (before children).  It was a real passion that I shared with many friends. I remember working on a climb, which was hard, 11 c+,  probably one of my hardest routes I have led. It was overhanging, steep and some holds that were hard to reach. I was determined and focused to do the route without falling or hanging, clean, with grace. I finally got the route, free, and clean and was happy. My friend said after, ‘ boy you have a lot of tenacity’. 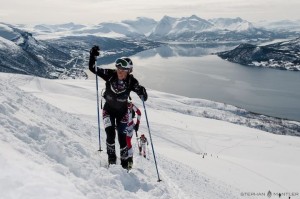 It was this kind of tenacity and grace  that has helped me train for the sprints, working the transitions until they were clean and fast, fluid and ultimately graceful. It was one of those races where I felt really happy and alive. And even better was the journey it took to get there way up north above the arctic circle. 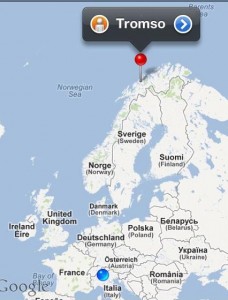 Tromso is 69′ north of the equator, way up there!

To me the sprint embodies a metaphor for life itself:  a series of rounds, with obstacles, challenging transitions,  ups and downs, highs and lows, fast and furious, calm and centered. The sprint challenges one’s ability to stay calm and focused amidst a storm, breathe through challenging transitions, move forward from mistakes and be tenacious until the end with a smile. 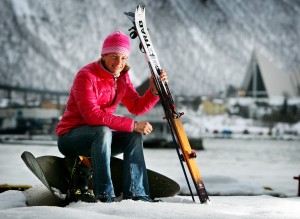 Happy to find Grace in Tromso

There is a certain busy-ness and hubbub that can take over our daily lives and overwhelm us. Being a mother of two active young boys, managing a household can be very hectic if you make it, but to do it with grace and a smile is the ultimate victory for me. The sprint event takes the same amount of grace.  This victory for me symbolizes a culminated effort, and in my mind a victory of grace. It is one I will continue to strive to embody in how I live my life, approach my work and how I raise my children. 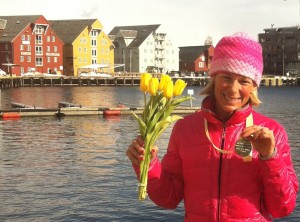 I have so much gratitude for all those who have helped me reach this goal. My husband and boys have stood behind this dream 100%. I could not have done it without the help of so many individuals, my parents,  friends and sponsors.