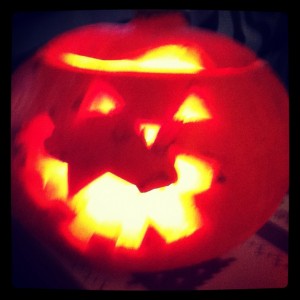 I searched high and low all over this little  valley in France for a pumpkin. Where are the big farm stands when you need them?  For that matter, where is mom’s pumpkin patch with gorgeous cinderella pumpkins? There is absolutely no tradition of carving pumpkins for Halloween in France. Pumpkins are for eating and it is considered wasteful to carve it.  I understand the concept, but  I was sticking with my tradition. I was determined to share a good ol’ fashioned Halloween experience with my boys no matter what side of the pond we were living. 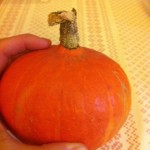 Low and behold, after visiting numerous shops,  we found one, much different from the original expectation, but perfect nonetheless for the time at place. This little pumpkin shined brightly.

It was really a Martha day today….ghost juice boxes, crafty bats and spiders, monster eyes made with jello, and roasted pumpkin seeds that nearly took over the oven while cooking. Clearly Martha would have had the popping seeds under control and managed to avoid her oven smelling horrible. 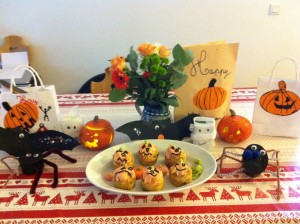 The display of the crafting…and cooking

If I had been thinking more clearly, tapping into my inner zen mama, I could have gone as Martha for Halloween. 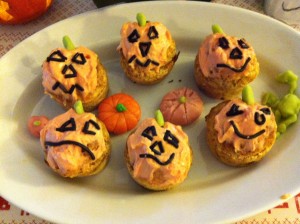 I did score some points on the “getting your kids to eat healthy chart” and this recipe was not from Martha Steward Living. The Vegan Butternut Squash muffins were a hit! It may have been the only vegetable injested between mouthfuls of trick or treat candy,  but it certainly was a good disguise.  The no candy rule was obsolete today, but the teeth care was on double duty.

What are you going to be for Halloween? We did not mail order our costumes from Costume World, thought they do have some sweet ideas, nor did we spend weeks sewing at home. The kids did have ideas in advance and created them completely solo. My youngest was a ghost who transformed into a skeleton half way through the evening when he saw how he could draw all over his body to create bones with the face paint.  My eldest was a vampire. This was the 2nd year in a row. He has not yet read the Twilight series, though he has flown through the Magic Tree House series. Recycled costumes are just fine.  It’s funny how sometimes we transform  easily into something different and other times sticking with the same thing just feels right. 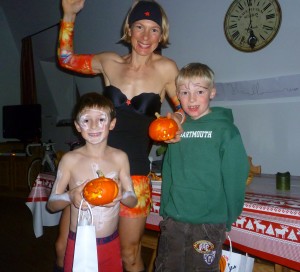 What was I going to be?   I thought about an hour before the party. Not Martha.  I had an ah ha moment..Wonder Woman... 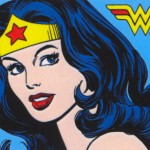 It’s always nice to have Wonder Woman on your side

After a quick calculation of the time and an assessment of  my wardrobe, mostly a collection sports clothes and jeans,  I soon recreated a new super hero  called “Zen Mama”……This super hero stars in a reality TV show which airs daily,  24/7 at my house.

To access her special powers she breathes in and out deeply three times. 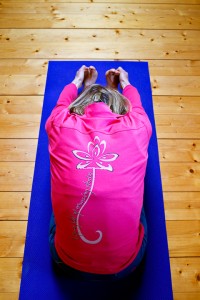 May your day be filled with good health inside and out

Breathe in Breathe out

Our thoughts and prayers go to those suffering from Hurricane Sandy.