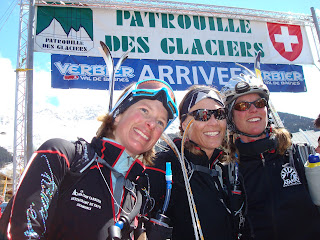 It was all of our 1st Patrouille des Glaciers-and it was a memorable one. We finished 7th place in the women’s civilian category, starting at Midnight in Zermatt and arriving 12:30hrs later in Verbier. In a nut shell the 12 1/2 hrs consisted of the following:

We started out in rain- ran through mud, wet snow and ice, skinned up the glacier through heavy snow with fog and high winds, skied down through moguls and crud, rappelled down an icy rocky couloir, climbed up the steep snow steps of Rosa Blanche 3600 meters, and hauled “ass” down the slopes of Verbier to arrive at the finish in the sun!

The Patrouille des Glaciers was our final race of the season- though it was also the first race on our mind of the season. We had to apply the race October and be selected -like a college application. We were preliminarily selected in November and the final selection was Dec. 22. So needless to say – it was a long and detailed process. We had friends’ teams who were not only denied but also rejected because they filled out the application incorrectly. But we made it, we read the 19 pages of Swiss military rules multiple times- as if we were combing with a fine tooth comb. It took a lot of organising and liaising with the team to sort out who would bring what in terms of equipment.

We set off mid day on Thursday the 17th of April to have a night of rest before the day to check in and start. Warren-dad, captained the Grey Goose- the 12 year old grey mini van- and we embarked on our journey over the mountain roads. It would take us 2 1/2 hrs by car from Chamonix. The typical Chamonix-Zermatt haute route takes 6-8 days -passing through Verbier. We were to set off and do this distance Zermatt-Verbier in less than 13hrs.
We parked the car in the Tasch parking lot and trained up to Zermatt. The Spanish team had the same idea as us to arrive a day early to rest a bit before the big day. Kilian Jordan, the young World Cup champion from Spain was on this team.

We met Tara in the morning and set off for our equipment check- It was very well organized by the Army. We were greeted by the soldiers who were cordial and friendly. It was speedy and efficient, much more so than the previous races like Pierra Menta and Mezzalama where were waited in line for hours to check in.

Lunch…pasta and pasta and more pasta to fuel and then a rest in the afternoon.

The briefing was at 5pm at the Zermatt Church. The place was packed. We had standing room only- Dad did not make it in with us- as he did not have the ” arm band” but he managed to sneak in the door at the end and got to see the Commandant’s cautionary words to dress very warmly for the -30Celsius temps at the top of Tete Blanch- 3600meters and the 75km hrs winds. He scared the crowd with photos of previous military patrouilles from the first race-faces with frost bite. They showed slides of the course to the Enya song, “sail away” and I visualized us sailing through the Swiss Alps into the night and the morning.

Because of the severe weather that was fore casted they would not make the final decision to run the course until 8pm. In the meantime, we prepared to go ahead. Some teams were deciding to not start. A fellow Italian women’s team made the choice because they had a colleague who had gotten severe frost bite at an earlier race- but he was only wearing light weight gloves.

Our nerves were a little on edge, but we had the measurement of 2 Swiss mountain guides, Danni and Michael. They both were watching the weather closely from a distance and said the weather was improving after midnight. They encouraged us that we would be fine just as long as we were prepared for the conditions with warm mittens and face masks and plenty of extra layers.

The race was a go. It was raining slightly at the start so we put plastic bags over our ski boots and skies. We started the race in running shoes, as the first 1:15minutes was running on a dirt, snow packed and wet road leading up a path. It started to snow. We finally reached the checkpoint of Stafel and changed out of our running shoes to our ski boots. Our running shoes were going to be picked up and brought to the finish.

About an hour later we roped up for the glacier. Our transition was fast. The army soldier gave us the go-ahead after looking at our knots and we put on some layers, our wind breakers and warm mits and we moved on. The visibility was getting worse but we forged ahead. We made it to the top of Tete Blanche in good time -and were doing well for the time barrier at 6:30 hrs in Arolla.

The decent down from Tete Blanche-roped up as a team was entertaining. Tara had her big headlamp which was awesome-shinning the path. We skied down through 15cm of fresh powder. Skins on again for an easy climb to col de Bertol. Not far…the magical Bertol hut stood high in the distance like an eagles nest.

Check point- Col de Bertol-skins off and down hill. Still quite dark and low visibility- but we set off skiing fairly conservatively for the descent. With in 30 min we were in Arolla for the re-fuel. We were fast on the decent passing lots of teams. Dad was there to meet us with water and food. We were able to drink up to the glacier then our water froze so it was nice to get some fresh water. I was not super hungry – after being at altitude my stomach was still nauseous but I tried to force something down. We left the high energy of the fans and supporters and set off w/in 10minutes up the next climb.

The climb out of Arolla was long- we set out at a slow and steady pace. There were crowds of people cheering along the way. We also were catching up with many teams at this point, some of whom were doing the Petit PDG. A short bootpack over the Col de Riedmaten and then a very icy -rocky chaotic rappel over the other side.

Then another descent and the long traverse of the lac de Dix then the final big climb up Rosa Blanche. I was feeling it now and my stomach was still nauseous. We managed to get some more water and refuel. Our team was working well and encouraging one another.

The crowds were amazing and encouraged us up the bootpack of Monta Rosa and then one more small climb-Pas de Chat- we pulled through to the last check point of Les Ruinettes, fueled by swigs of spectators Coke. Coke is the beverage of choice for the long haul.

And then we hauled it down for the descent, doing what we do best, skiing fast down, even though at times it felt like our legs were going to give out. We weaved through the day-tripper skiers who were on the slopes of Verbier and made some nice turns on the groomers. Finally we arrived in Verbier and clicked off the skis, and had to run 2km to the finish! Crowds of people lined the streets of Verbier, cheering. I had just one thing on my mind, get to the end and meet my family and give them a big hug. Michael, Birken, Anders and Dad and Anna were there waiting for us. “Go mommy Go!” Allez, Allez! Yay, we made it!

A special thanks to:

this will give news and updates on the race- links to weather stations and other articles.

here is a video that shows how difficult it was to make the decision to run the race due to high winds and severe colds.

Here is a link that follows a British civilian team and gives you another taste of the conditions.
http://www.swissinfo.ch/eng/front/British_team_survives_gruelling_mountain_race.html?siteSect=105&sid=8996535&rss=true&ty=st