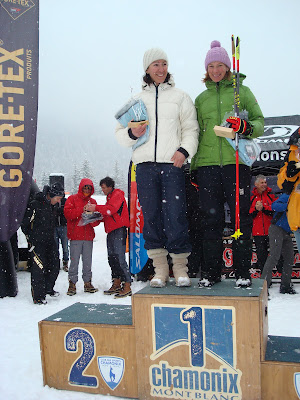 The 2nd “Run & Skate” was held on sunday, February 22 here in our home town of Chamonix. It is a race- 12k run on snowy trails and 18k skate ski. It can be done indivdually or in a team. I was teaming with Severine Gaillard, a friend from my local running club-CMBM. It is not often that I only have to go 2 minutes to the start of a race. Even better, the race did not start until 10 am and my skate leg at 11:15. (Normally our starts are 8 or 8:30 which means for an early rise.) Needless to say it was an early rise at home. The boys, comme d’habitude, awoke at 6:15. They must be taking after their uncle Bunge who was an early riser at their age and still is to this day! 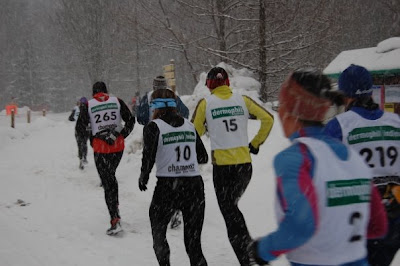 We awoke to snow falling steadily. The start of the run set off at 10am and Severine battled out the trails blanketed with a fresh couche of snow. The run was quite technical gaining +420 of elevation in 12k. She arrived at the tag zone, snowflakes across her brow and tagged me off.
I set off for my first of 2, 9k loops onto the powdery piste- ungroomed, and had memories of the Transjurasienne in 2005 when it snowed heavily on the 54 k course. I knew the course well and tried to stay relaxed as the snow kept piling up on the trail. One would have thought they might have tried to groom it in the morning, mais pourquoi, as they say here. It made it for a little more challenging and these “trailers” and “fonders” as they call them in France are pretty hard core- so they had to keep up with the image I imagine. Thanks to my wax technician, a.k.a. my hubby Michael, my skiis were fast, as fast as I think they could be in the difficult conditions. I started out with clear glasses but by the first big climb they were fogged up, so I had to put up with snowflakes in the eyes for the remainder of the course. Michael was out on course cheering me on, as well as many other local friends. It always helps to have encouragement on course. And the best was at the finish when I found my boys cheering me there! 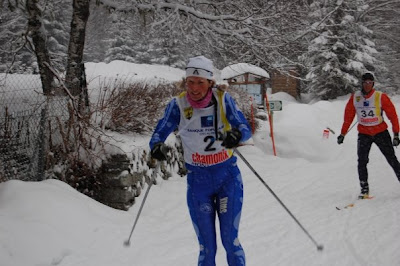 The event was a super fun ambience with many friends from my CMBM running club and the Chamonix Ski de Fond Club. There were many folks who came out to help volunteer for the race. It would not have been a success without all their efforts as well as the super efforts from Fabienne and Tiery Ravenel of Ravenel Sports in Chamonix. http://www.ravanel-sportshop.com/
I was informed this morning we were on French T.V. last night and they showed us on the podium! Quelle chance!

This is how much snow we have in the yard! What a snowy winter! 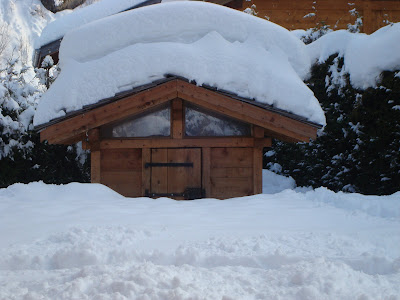