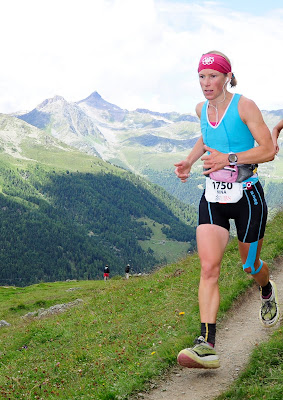 The Sierre-Zinal, also called The Race of the Five 4000 m Peaks, might be called by some, one of the finest mountain races in the world. “It was once written that it is to mountain races what the New York Marathon is to marathons. It is the oldest mountain race in its category in Europe.” With that said, I am a little bias, as I think the race in my own back yard is one of the most beautiful trail races, the Marathon or Cross du Mont Blanc. The Sierre Zinal could be compared to the NYC marathon, though I have never run it, as there are sure a lot of runners on the trail. The most challenging part for me on the course was trying to pass people on the technical narrow trail, and not being agro enough-yelling, pass or course or what ever you can say to get the guy to move over! Next time! 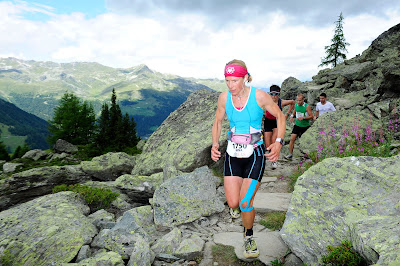 This course takes place in the heart of the Valais Alps of Switzerland, not too far from my home in Chamonix. This year, held on August 8th. It is 31km w/ 2200 meters of ascent and 800 m of descent. This year it was fun to see a bunch of ski mountaineering folks racing, and a change to see them out of their lycra full piece race suits in summer! Kilian Jornet, won the race for the 2nd year in a row despite getting a bad bee sting the day prior. It was fun to have my pal Lyndsay on course too cheering from her bike!

This was the 2nd time I did Sierre Zinal, the first being 2 years ago. I think after the first time I vowed never to do it again, but somehow forgot the pain and there I was running again this year, up that steep first hill with a crowd of people. As 007 says, Never say Never Again. This year I managed to shave off 30 minutes from my time 2 years ago, finishing under my goal of 4 hours in 3:50, despite the severe calf cramp that arrived with 1 km to go to the finish. I Finished overall men and women 224th out of 989 finishers and 18th overall out of 224 for women . 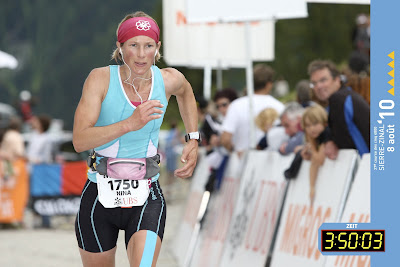