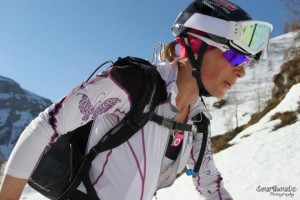 The Grande Course a.k.a. La Grande Course is a ski mountaineering championship  series that connects the most important and prestigious skimountaineering races of the world over two seasons 2011/2012. The races include: Adamello Ski Raid (Italy), Patrouille des Glaciers (Switzerland), Pierra Menta (France), Tour du Rutor Extreme (Italy), Trofeo Mezzalama (Italy) over two years. This was the first year in history the Grand Course races were united. The ranking is based on a points system over the 2 years for individuals. Nina finished in 5th place behind the top ski mountaineering women in the World. 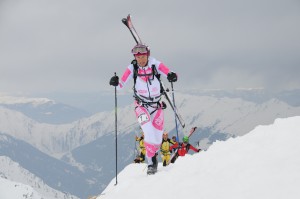 "Commitment unlocks the doors of imagination, allows vision, and gives us the "right stuff" to turn our dreams into reality" -James Womack 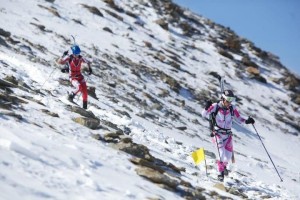 The winner was the French World Champion, Laetitia Roux, followed by Mirea Miro, the young Spanish star, 3rd/ 4th respectively were the Italian Dynamic duo team, Roberta Pedrazini and 4th Francesca Martinelli. All four women have heaps of experience in the sport with Roux and Miro the young stars of the sport and Pedrazini and Martinelli years of ski mo racing in their belts, sharing the same age as me. [These four women have more World Cup wins and World Championship gold medals than any other women (probably men too) in the history of the sport and are undoubtably the four biggest names ever in ski mountaineering race history, ed. Michael Silitch] 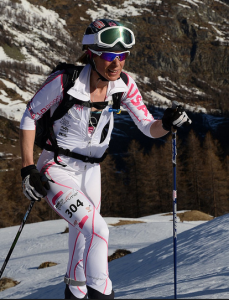 I am really excited to finish 5th overall in the Grand Course ranking. It was not easy to do both the World Cup circuit and the Grand Course series during the two seasons and finish respectively in both. I finished 8th overall in the 2012 Overall World Cup(and 9th overall in 2011), with a World Cup Gold Medal this year in the Sprint race in Norway. It makes for a very charged race calendar as well as different types of races to train for. Many racers choose not to do both. It is funny, but I love to sprint distance and the long endurance distance, two completely different races.   This overall Grande Course result marked not only a lot of hard work and effort, but a consistency that paid off in the end result. 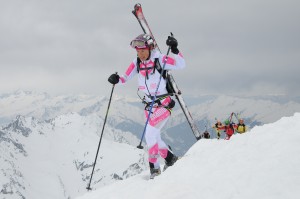 "Commitment unlocks the doors of imagination, allows vision, and gives us the "right stuff" to turn our dreams into reality" James Womack

This season’s series included the famous French ski mountaineering stage race, The Pierra Menta (a.k.a The Tour de France of Ski Mountaineering)–it was also the only race to be run both years. It is surely one of the most famous and challenging races. This race is 4 stages long and racers climb almost 10,000 meters in altitude over the four days.

In 2011 I  finished 7th overall in the 2011 Pierra Menta with my Austrian Partner Veronika Swidrak. 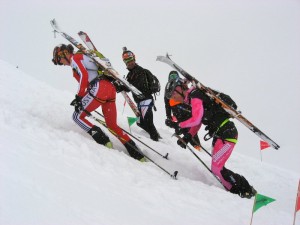 Veronika and Nina on a boot pack in Pierra Menta 2011

The Italian Adamello Ski Raid is a beautiful high altitude ski mountaineering race on glaciated terrain.  This one day race summits the Adamello Peak, 3400 meter with an equal amount of climbing and lots of kilometers (3400 meters and 42km). I raced with Bladine Ducrest and we finished 8th overall in a time of 7h28 min 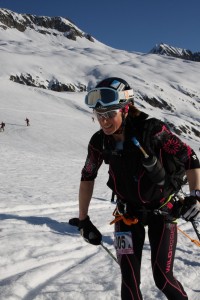 The Italian Trofeo Mezzalma is really a hard core ski mo event. The majority of the race is held above 3000 meters in altitude with a brutal first climb of 2000 meters and a ruthless time cut. 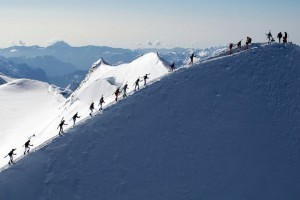 Climbing across Castor Ridge in the Mezzalama

This race is not for novices and really does elimiate the riff raff. If you don’t make the time cut, the Italian Mountain Police say, “ARRIVEDERCI!” Rightly so, as most of the race is in technical, high alpine, glaciated terrain. This was the 3rd time I went to the start line of the Mezzalama. The first year, in the debut of my skimo race days in 2007 we did not make the ruthless time cut. In 2009, the race was postponed for 2 weeks and I was unable to participate due to flu. 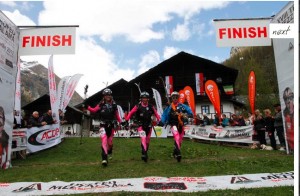 Lyndsay, Nina, Valentine cross the finish of the 2011 Mezzalama in 6th place

In 2011, with my teammates, Lyndsay Meyer, and Valentine Fabre we were very happy with our 6th place overall finish. 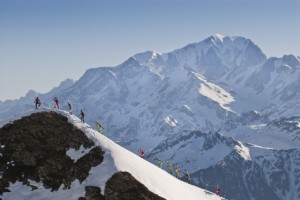 In 2012 the Grand Course Races included, again, The Pierra Menta. This year I raced with former Mezzalama teammate and Chamonix ski alpinisme teammate Valentine Fabre. We finished with a very respectatble 5thplace behind the top teams in ski mo. 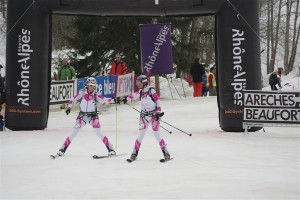 This was my 4th time doing this race, and every year I say my last. I am super proud as each year the result was better and better with more experiecnce. The first year I think I placed 16th and was purely glad to finish this event in 1 piece. 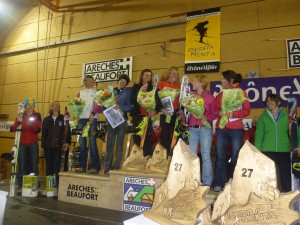 The Tour du Rutor Extreme, a stage race of 3 days, held every other year, is just on the other side of Chamonix in the Aosta Valley. The ambiance at this race is very amicable and the organzation excellent. This race has 3 long, hard stages and one of the only races that will clock the time of a racer on the descent. 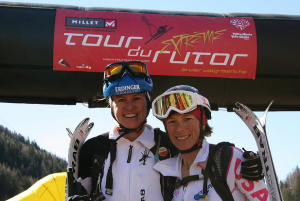 The last race of the GC series in 2012 was the Swiss race, the Patrouille des Glaciers, organized by the Swiss army. This prestigious event takes an incredible amount of manpower to organize and does have its history rooted deeply in the culure of ski alpinisme. This race is long 53km with 4000 meters in elevetaion climbing and it also passes up at high altitude. 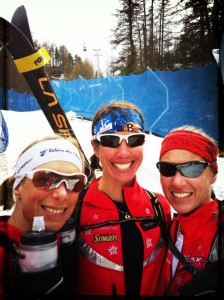 Nina, Sari, Lyndsay out for a training blitz before the race

This year I was very excited to race with my USA womens team Sari Anderson, endurance athlete, and Lyndsay Meyer, who I started this crazy skimo sport with that many of you many not have even heard of. The three of us had a great time getting ready for this event. 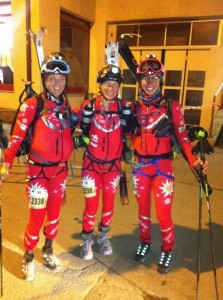 PDG: We started at midnight on foot from Zermatt (about 1hr of running w/ skis on back)

Due to serious mountain weather, high foehn winds (pronounced foon) up to 180km/h and an unstable snow pack,  the course was stopped in Arolla.  This followed on the heals of an earlier cancelation on the first start of the race on Wednesday. 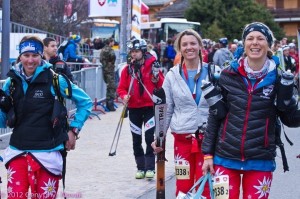 Needless to say  we did a strong effort until Arolla despite binding issues for some and snow mountain sickness for others, all part of the game and working together as a team. Despite the shortened course by 1/2 , we finished a strong 7th place in a very competitive women’s field. A huge thanks to Texner who provided us with some beautiful suits. 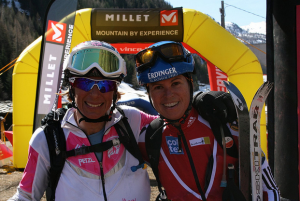 TEAM = Together Everyone Achieves More

Clearly the Grand Course races are different than the World Cup or other races. They are longer in effort, usually 6-10 hrs in length, often on high-altitude glacial terrain, and combined with true technical mountaineering aspects and high mountain weather conditions such as cold, wind, etc. Or, like the Pierra Menta, a series of longer stages over 3-4 days.

The most obvious difference is the team element. The team element of ski mountaineering racing adds the facet of working together as a team, sharing the experience to make it a safer and more supportive envrinment. In some parts of the Grande Course races, it is required to rope together to minimize risk while crossing crevasse areas on the glaciers. Other times, one team member can be a stronger climber and the other a stronger descender and either pull a partner up the hill or lead them down.  A good team, combines members of similar ability, can work together, can build on one another’s strengths and help each others weaknesses. Surely to be a harmonious team is key to a successful race, just as in any partnership!