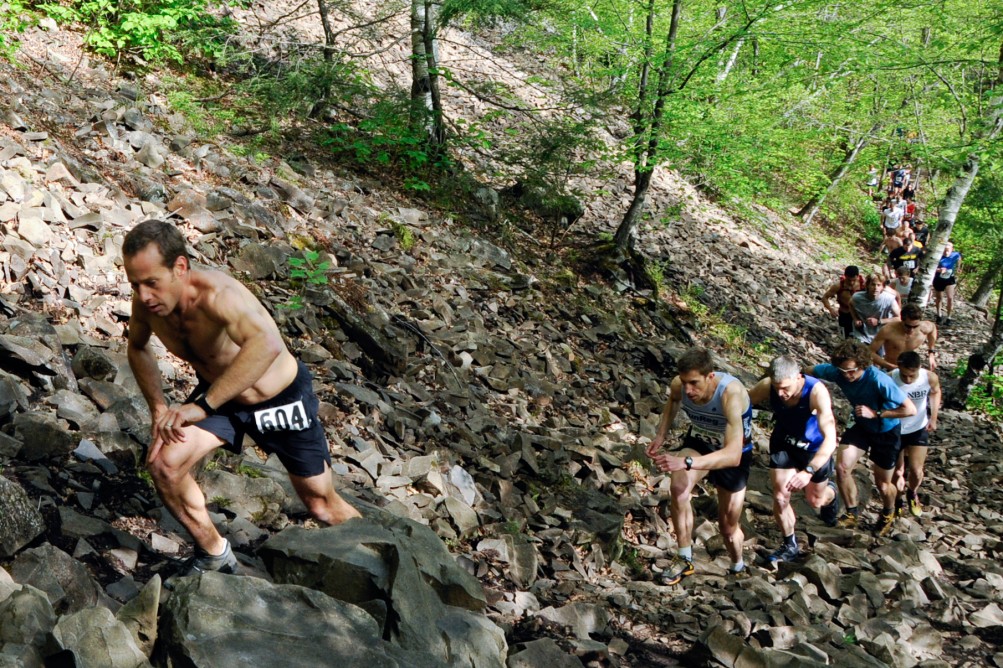 Not knowing much about the Seven Sisters Trail  race other than it was dubbed the hardest up/down race in New England in Runners World‘s  and it was part of the Grand Tree Trail Series , a few of which I did last fall. So far this is my 2nd in the series this season and my big goal for the spring is the Wapack 21 mile which is the range I look at from my window. This series has allowed me to discover new trails and meet new folks who like to get after it on the trails.  This race was 12 miles long and about 1300 meters (4,265 ft) of climbing. Here is my own moves count report 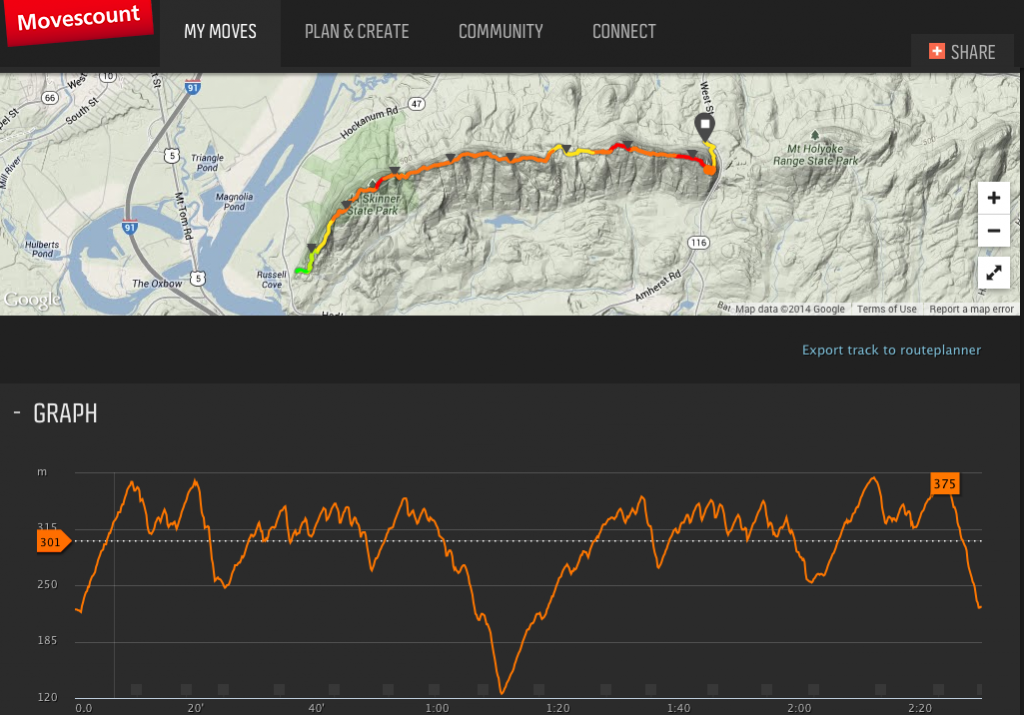 A shot from my Movescount report

I set off early sunday morning after a fundraising event at my old elementary school in Williamstown, MA ,Pine Cobble and made my way to Amherst, North Hampton area. I was really wondering where I was going to find hills in these parts. 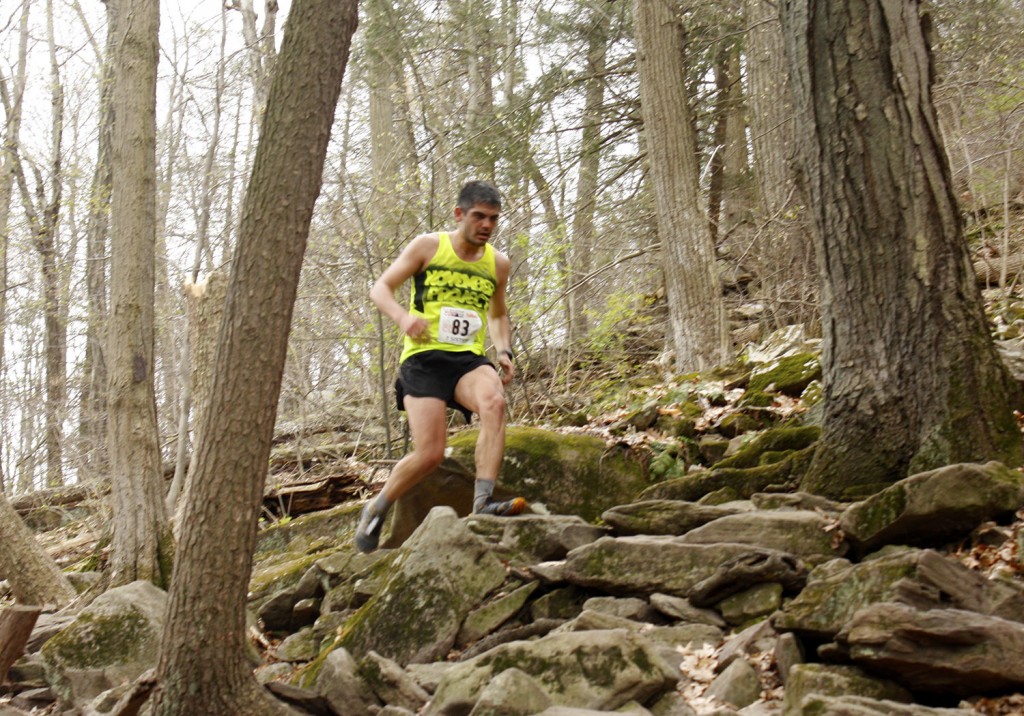 This year there were a couple changes to the race. This was a race that started as a low key sunday run amongst friends has evolved into one that hosts over 400 racers, and this year part of the La Sportiva Mt Cup. This year it brought top USA Mt Running athletes such as Megan Kimmel of CO, Ryan Woods, Bryant Jason, and Amber Reece-Young. 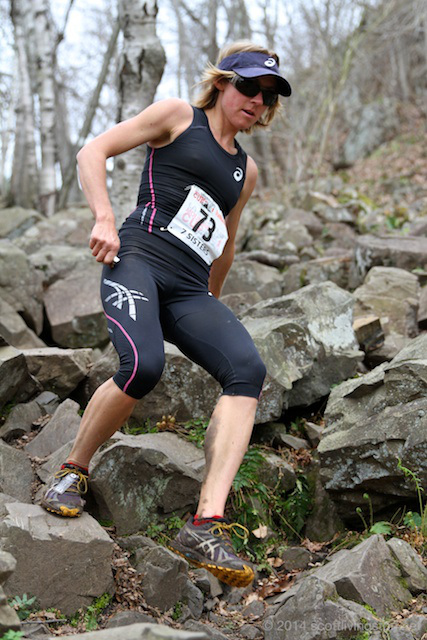 Megan Kimmel, member of the US Mt Running team and the overall winner of the La Sporta Mt Cup for 5 years (Photo Scott Livingston)

I was pretty excited for the course, as I love running technical trails. It keeps things interesting. One has to be hyper focussed and not let thoughts drift one way another or else….game over. It might be an ankle twist, knee bash or trip. I had one slip at the start before climbing up the first steep climb right out of the start, and later on I had one ankle roll which I recovered from very quickly. 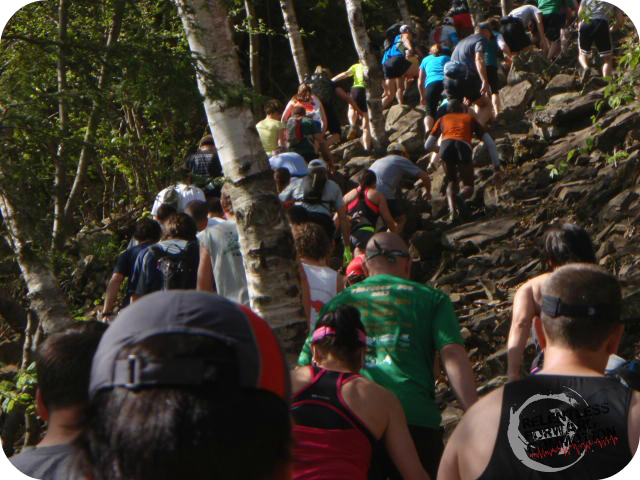 The first steep climb out of the start. This year, there were 4 waves which alleviated the bottle neck. photo: www.relentlessforwardcommotion.com

The rock was a combination of sharp, pointy, smooth basalt and then of course there was mud and roots and other kinds of boulders. There were very few times in the out and back of 6 miles that one could let it roll. 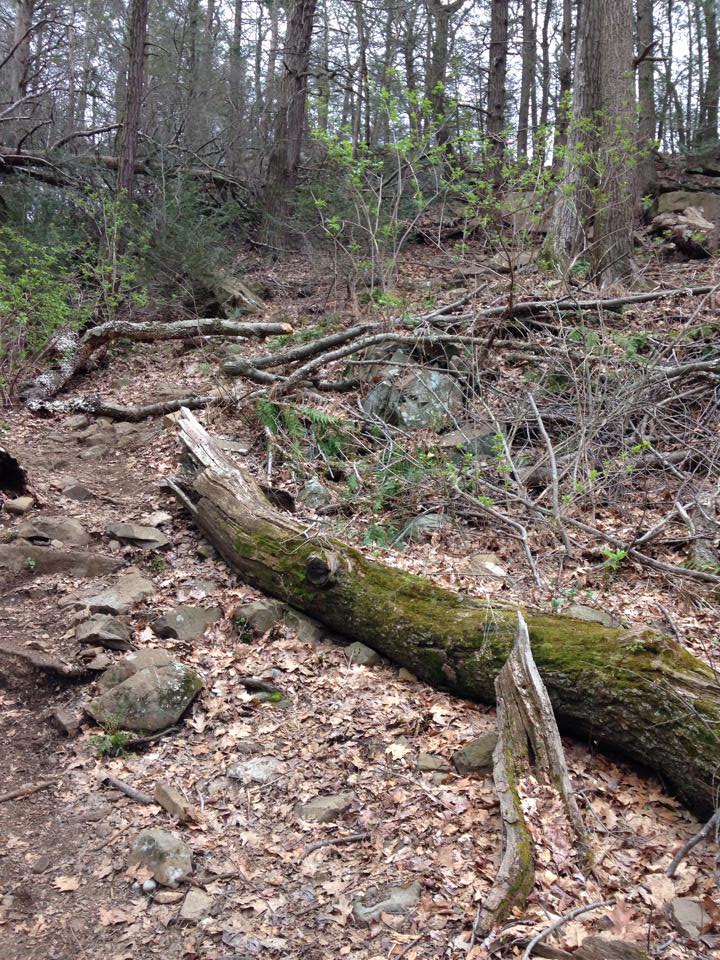 Rock, roots, mud. This was one of the tamer sections on course  Photo  Tara Roch

So, those of you that live in the Alps, you can begin to get a sense of what trail running in New England is all about. I am beginning to get friendly with the trees. I miss the big mountains, big open views. I am looking forward to some Alpine adventures in the coming months and catching up with my friends over there. 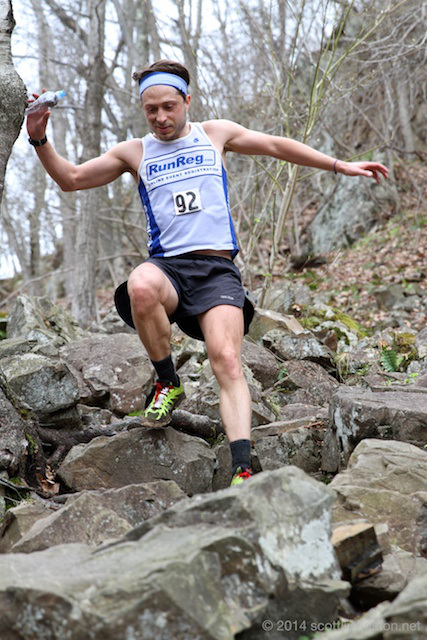 I felt quite good on course but am also careful not get injured as I have a lot of things ahead of me that I want to do, namely next weekend, The Wapack Trail and then over in the Alps some summer adventures. It is so easy to make one small move and its over. 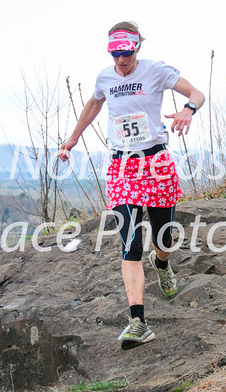 I was in 5th/ 6th place for women and feeling strong, pushing it on my strengths which was the downhills. The short, steep uphills and downhills were a strength for me. 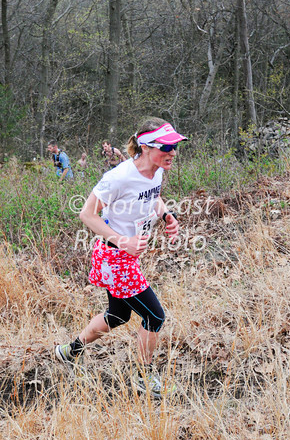 on the way back. 2nd half more uphills than 1st (photo- North East Race Photo)

My goal was to finish in 2h30. 2h26 which was the winning women’s time last year but realized the way back was longer with more uphills than the way back. I  finished in  2h30 min and came in 6th overall for women and won my age group. 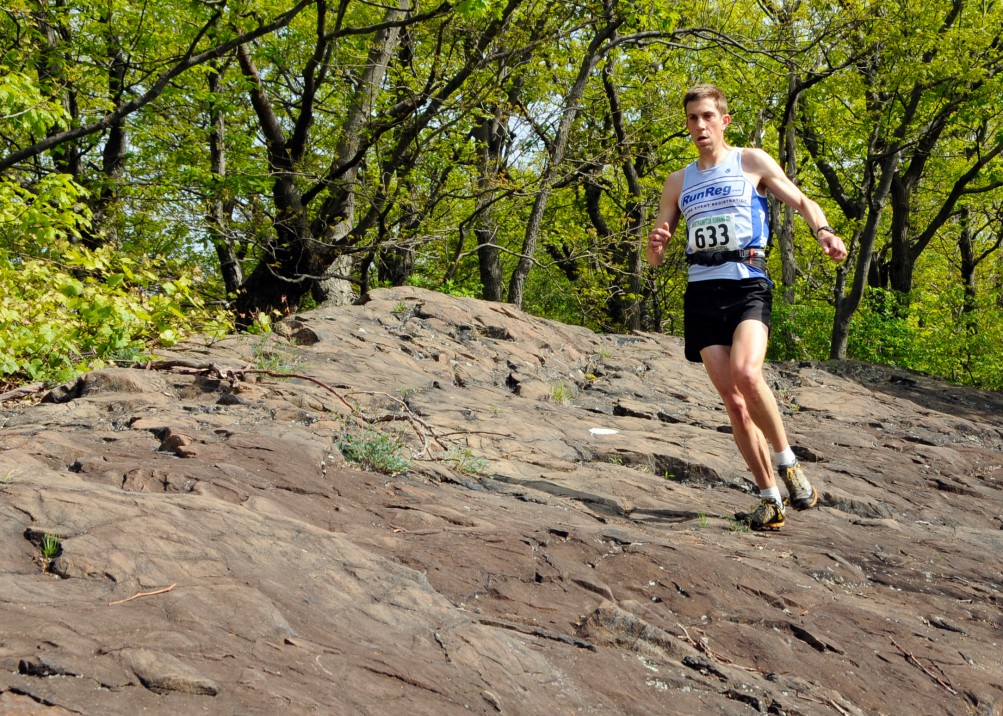 The weather started out kind of warm but quickly become ominous and grey. It was actually a perfect running temp. The few showers and thunder clouds cooled things off a bit too. 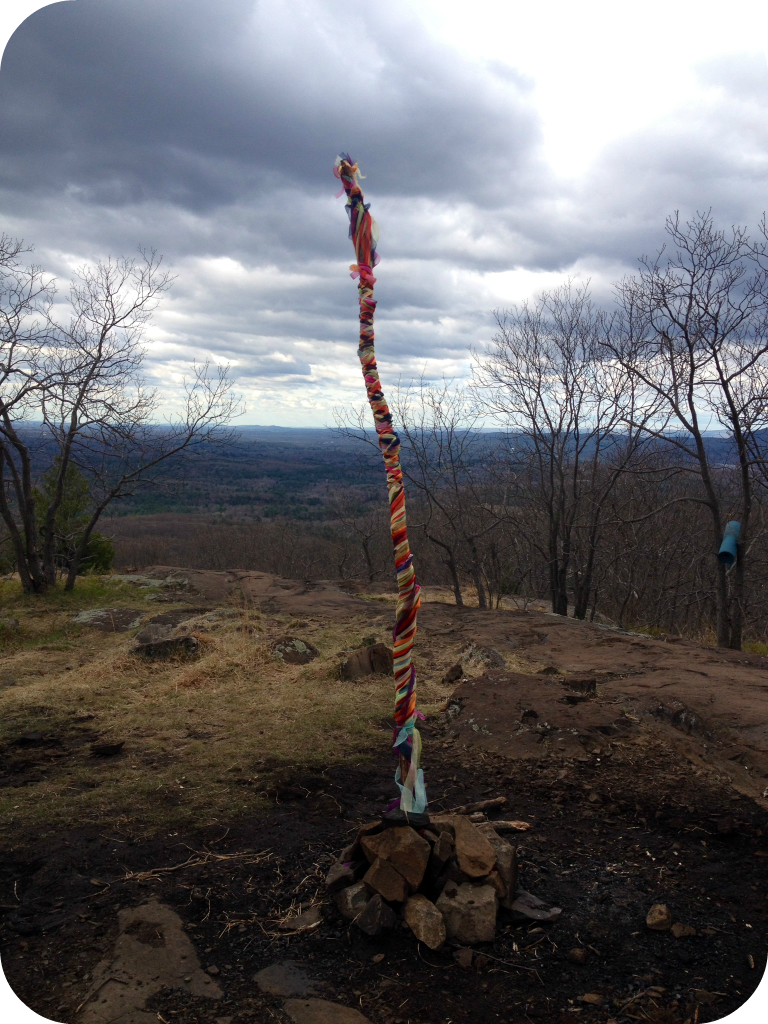 It was a super fun event and it will definitely be in the books again next year. 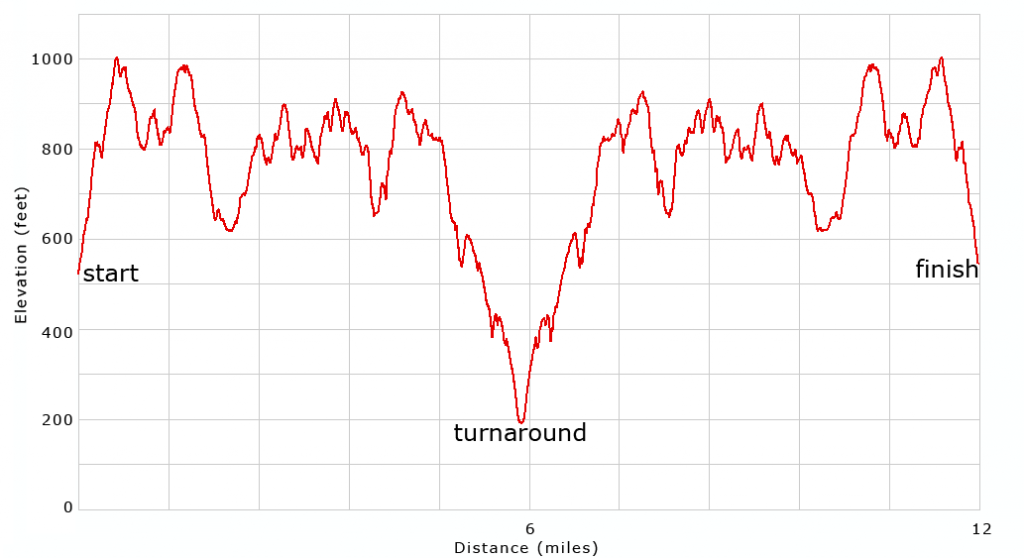 This week my big objective is to help my body recover as efficiently as possible for the next race on the calendar which is the Wapack Trail 21 mile:  yoga flow, easy recovery workouts, rest and good nutrition combined with finding that fine line of balance between work, family and exercise. For me, getting out there and push 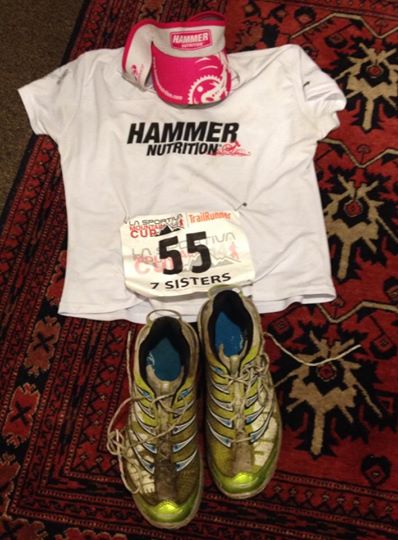 Thanks to all the people who helped share their photos for this post.  A big thanks to Adam St. Pierre of Boulder Center for Sports Medicine who has helped me juggle the balance working. family and training. Also to Camelback, Hammer Nutrition and Hoka for their support!!! The Podium arc belt was awesome, as were my Heed Feeds with some Hammer gels and my Hoka One One Kailua Trail Shoes. And lastly to my husband, Michael and my amazing kiddos who support me 100% and know how important it is to get out and enjoy the mountains and trails whether its on foot, on wheels or skis. The best is when we can do it all together! 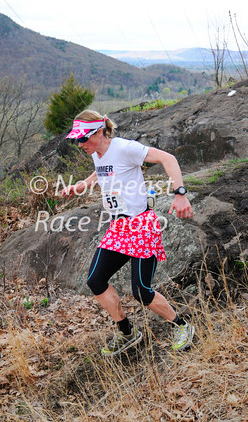 About 1/2 way through the course